‘Most powerful PH leader since Marcos’ 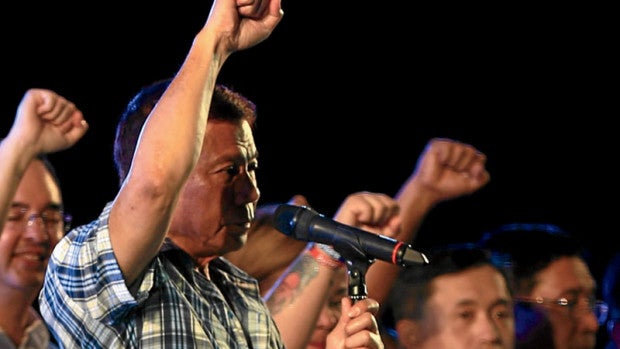 Rodrigo Duterte is on course to becoming the Philippines’ most powerful President since his idol, the late dictator Ferdinand Marcos.

Former Akbayan Rep. Walden Bello said that with a supermajority in the House of Representatives and the Senate in his first year and the upcoming vacancies on the Supreme Court that have to be filled, Duterte would have control of all three branches of government.

The 71-year-old Duterte doesn’t even have to declare martial law, or form a revolutionary government, as he had threatened to do during the campaign period, Bello told the Inquirer.

Bello said he was appalled by the emerging  supermajority coalition in the next Congress even though Duterte’s Partido Demokratiko Pilipino-Lakas ng Bayan (PDP-Laban) had only three members in the 290-strong House—Pantaleon Alvarez of Davao del Norte,  Erik Martinez of Valenzuela, and Jun Papandayan of Lanao del Sur—and only Sen. Aquilino Pimentel III in the 24-member Senate.

“Due to the shameless turncoatism of Liberal Party members desperate to preserve chairmanships of committees, we are left with no viable opposition or minority in Congress. At the beginning of Aquino’s term in 2010, there were at least around 30 members of the minority. Now you’re down to  probably less than five,” said Bello.

“I don’t blame people for regarding congressmen as rascals who are only out for themselves. And I won’t be surprised if Duterte treats these turncoats with the contempt they deserve,” said Bello.

A few hours after Alvarez declared that the PDP-Laban had clinched a supermajority in the next Congress,  Sen. Panfilo Lacson said a supermajority was being formed in the Senate with Pimentel as Senate President, the LP’s Frank Drilon as president pro tempore and the Nationalist People’s Coalition’s Vicente Sotto III as majority leader.

“With Duterte appointing  nine of retiring Supreme Court members by 2019, we are left with a very powerful President, the most powerful since Marcos,” said Bello.

He said that with check and balance among government institutions “on the verge of extinction,” he was counting on civil society to serve as opposition to Duterte.

But Bello said he did not expect too much resistance from civil society, which had been hit by divisions in its ranks.

“I think even Duterte is probably surprised at how easy has been his walk to a virtual dictatorship,” he said.

Duterte’s allies were quick to dismiss Bello’s fears of a virtual dictatorship as baseless because lawmakers would not   agree to be a mere rubber stamp of the Chief Executive.

Bayan Muna Rep. Carlos Zarate, who declined Duterte’s offer to be his environment secretary, said the drive toward getting a supermajority in Congress, which would ensure passage of administration bills and thwart any attempt at impeachment, has become sort of a tradition in the post-Edsa Congress.

“It’s not actually new that an incoming administration will attempt to marshal as many allies or form coalitions in both houses of Congress to push its priority legislative measures. Blame it on the current multiparty system where one can just easily jump from one party to another without any sanction at all,” Zarate said in an interview with the Inquirer.

“As it was before, it is a continuing challenge for both houses of Congress to keep their independence, not being docile or a rubber stamp of the administration, or being an obstructionist,” he said.

Zarate is a member of the Makabayan bloc, which could leave its traditional role as House fiscalizers in the 17th Congress as it pondered on the offer of Alvarez to join the majority coalition.

“The Makabayan bloc, while maintaining its organizational independence, has already expressed its support to the propeople and propoor programs and agenda of the Duterte administration, as we continue to constructively engage it in other issues,” he said.

The majority coalition in the House may include the Makabayan bloc, but no definite terms have been agreed on yet, as the “situation remains in flux,” Zarate said.

Ako Bicol Rep. Rodel Batocabe, interim head of the party-list bloc, said that while his group might be part of the majority, it did not mean members would follow Duterte all the time.

“I don’t think it will happen since there will be issues that may require a conscience vote rather than toeing party lines.  In the past, there were legislators who crossed  party lines and supported or opposed measures based on their conscience  or sentiments and needs of their constituents,” Batocabe told the Inquirer.

Batocabe said strengthening the lobby system of interest groups and constituencies would enable them to be a major factor in the legislative process.

“With more aggressive lobby groups, our legislators will be compelled to vote based on the needs of their interest groups and their constituents rather than the dictates of their parties,” said Batocabe.

Ilocos Norte Rep. Rodolfo Fariñas, who is expected to be elected majority leader, disputed Bello’s view that Congress would be a rubber stamp.

“It is a deliberative body where all its acts are open to public scrutiny. If Congress agrees with the legislative plan of the President, it will pass the necessary legislation, and when it does, it should not be considered a rubber stamp. Neither should it be considered a stumbling block if it chooses to disagree by not legislating,” he said.