Media covering Rody still left out in the cold 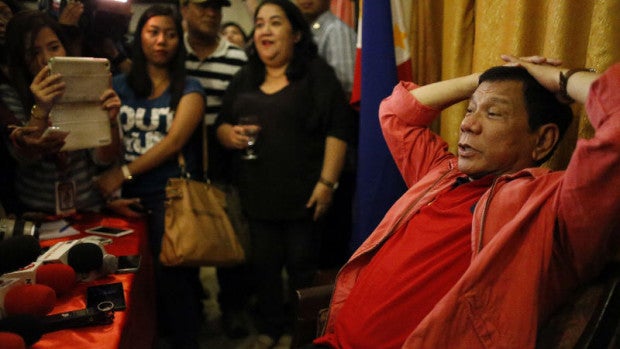 DAVAO CITY—At least Digong proved to them he’s for real, even for once.

Journalists covering President-elect Rodrigo Duterte got a taste of what it felt like being snubbed by arguably the most loquacious occupant of Malacañang.

Members of the media, among them Rico Hizon, the Filipino anchor of the BBC World News, were barred from entering the presidential guesthouse compound in Barangay Panacan where Duterte met with outgoing Speaker Feliciano Belmonte Jr. and other members of the Liberal Party on Tuesday night.

“He did not call a press conference (anyway). Why would you be allowed to go inside?” he said. “There will be no more press conferences. Go blame your flippant colleagues who were asking wrong questions and attributing wrong quotes.”

Panelo,  lawyer until December of the family blamed for the murder of 58 people, including 32 media workers, in Maguindanao province in 2009, said some journalists who were attending Duterte’s late-night news briefings “should study journalism again.”

Security was tight outside Duterte’s temporary office, popularly known as Malacañang of the South, which is located inside the regional office of the Department of Public Works and Highways.

Since his proclamation as winner of the May 9 presidential balloting, Duterte has been holding meetings and press briefings at the guesthouse.

But the situation has changed drastically. On Tuesday, only the crew of the state-owned People’s Television Network 4 (PTV 4) were allowed entry by members of the Presidential Security Group and private security personnel manning the main gate.

Reporters and crew of other news agencies spent more than six hours waiting for an official statement about what had transpired during Duterte’s meeting with Belmonte’s group.

A Manila-based television reporter, who flew here to report on Duterte’s activities, said the outgoing Davao City mayor’s decision to ban journalists was tantamount to “restriction” on the freedom of the press.

“Journalists and politicians are expected to be hostile to each other because they have different interests,” said the TV reporter, who asked not to be named for fear of reprisal from his superiors.

“He may not like our reports, but we have the duty to inform the public. President-elect Duterte should understand and recognize the important role of the media in a democracy,” he said. “Is this part of the change that he has promised us?”

Panelo said the incoming President, who has been flip-flopping on his public statements since the campaign, was keen on keeping his word to boycott the media “for the rest of his term, unless he changes his mind.”

“He said that he will do that for the rest of his term. There will be no more press conferences,” Panelo said.

On Sunday, Duterte told a television network that he had decided to spurn media interviews in an apparent retaliation for the call of an international media watchdog to boycott his news briefings until he issues a public apology.

“That’s it. I don’t want to be interviewed. If I commit a mistake, there will be more criticisms,” Duterte said. “So it’s better (if there’s) no interview, no criticisms, no wrong statements, no nothing. (I will just) shut up. I really don’t want it.”

Panelo said Duterte’s order not to let reporters enter the guesthouse compound should not be taken as a restriction on the movement of the media.

He said there were other ways to get information about the incoming Duterte administration.

For one, he said PTV 4 would be releasing video footage of Duterte’s official functions.

“How can that be a restriction? In fact, it would be better because we will now have official statements of (Duterte). You can no longer distort it, you cannot deviate from it. You can only quote it,” he said.