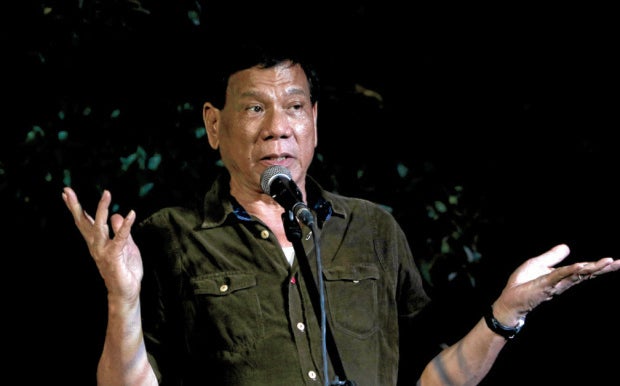 President-elect Rodrigo Duterte spent over P371 million on his campaign for Malacañang, bankrolled largely by big businessmen and patrons from Davao City, according to his statement of contributions and expenditures (Soce) submitted on Wednesday to the Commission on Elections (Comelec).

But Duterte was not the biggest campaign spender among the five candidates in the May 9 presidential election.

That honor goes to Sen. Grace Poe, who reported spending P510.84 million on her campaign, which saw her finishing the race in third place.

Wednesday was the deadline for the submission of campaign expenditure reports.

The Comelec’s Campaign Finance Office extended the 5 p.m. deadline to 6:30 p.m., but no report from Roxas arrived.

Under Comelec Resolution No. 9991, failure to submit the Soce for the first time is punishable by a fine of P10,000 to P30,000 depending on the position.

Second-time offenders will be fined P20,000 to P60,000 and they could be perpetually barred from running for public office.

Outgoing Vice President Jejomar Binay invested P463.45 million in his failed bid for the presidency, while Sen. Miriam Defensor Santiago was the most frugal, spending only P74.6 million.

According to Poe’s report, she received P511.95 million in cash donations from various sources. The report did not indicate donations in kind. It also showed that she did not spend her own money on her campaign for the presidency.

Documents submitted to the Comelec also showed that former Davao del Norte Rep. Antonio Floirendo Jr., son of the late banana magnate Antonio Floirendo Sr., made the biggest contribution to Duterte’s campaign, P75 million, or 20 percent of the total contributions to the electoral war chest of the longtime mayor of Davao City.

The campaign expense report submitted by Duterte’s representatives on Wednesday showed that Floirendo donated P25 million in cash in March and P50 million in April.

In total, Duterte received P375,009,474.90 million, of which over P298 million was in cash and the rest in kind, such as tables and chairs, light and sound systems, campaign posters and vehicles for motorcades.

Duterte reported that he  spent P200,000 of his own money on his campaign.

Binay’s expense report showed that there was over P77,000 left of the total P463,453,000 cash contributions to his presidential campaign.

Santiago’s report stated that she had spent all of the P74,652,689.87, which was identified as in-kind contributions received from her political party, People’s Reform Party.

Among the six vice presidential candidates, Vice President-elect Leni Robredo had the  biggest expenditure, amounting to over P418 million.

Her closest rival, Sen. Ferdinand Marcos Jr., reported that he spent only P140.54 million. Of this amount, P9.8 million was his own money. He received a total of P130.7 million in cash and in-kind donations from various sources.

Sen. Francis “Chiz” Escudero received over P322 million in contributions. He spent P320.5 million. His report showed that he did not use personal funds for his vice presidential campaign.

Sen. Antonio Trillanes IV received P61.16 million in donations. He shelled out P736,569 from his own pocket, spending a total of P61.89 million on his failed vice presidential bid.

Sen. Gringo Honasan spent the least among the vice presidential candidates, paying only P26.25 million for his campaign. He received P25.9 million in cash and in-kind donations from various sources and spent P296,449.20 of his own money.

Among the senatorial candidates who submitted their expenditure reports on Wednesday, former Metro Manila Development Authority Chair Francis Tolentino spent the biggest amount, P199.15 million, but failed to win a seat in the Senate.

Read Next
Grab, taxi operator in trouble over ‘extortionist’ driver
EDITORS' PICK
Metro Manila to remain under COVID Alert Level 2 until December 15
IATF tightens border control, suspends entry of fully vaxxed nationals from ‘green’ countries
Villar Group gears up for AllValue Shopping Party on Dec. 3; around P 1-million promos and discounts up for grabs
Duterte open to making jabs mandatory; Cabinet mulls ‘pressuring’ the unvaccinated
Legarda: Ending Violence Against Women, a cause for all
A delightful blessing!
MOST READ
Quiboloy warns of ‘much worse than Omicron virus’ if his ‘persecution’ is not stopped
Omicron poses ‘very high’ global risk, countries must prepare–WHO
Marcoleta defends pol ads on ABS-CBN
Bongbong Marcos’ conviction in tax case not a crime involving moral turpitude — lawyer
Don't miss out on the latest news and information.