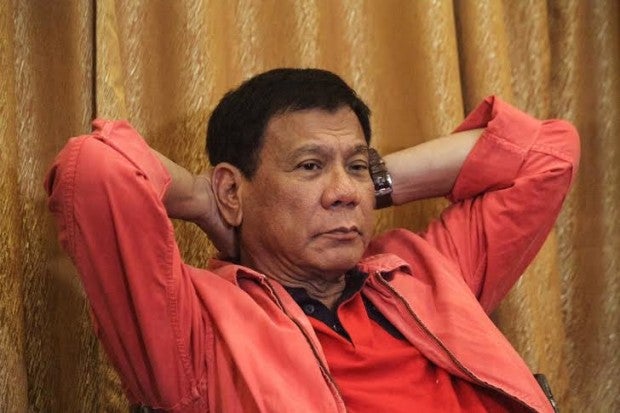 INCOMING President Rodrigo Duterte does not tolerate the killing of journalists, as claimed by the United Nations based on his statements last week.

“If you look at the transcript, there is nothing there that says he was encouraging violence against journalists,” the Davao City mayor’s spokesman Salvador Panelo told reporters by phone on Tuesday.

The UN Rapporteur condemned Duterte’s statement that corrupt members of media are not exempted from assassination, saying that it was an excuse for violence against journalists.

The UN said that Duterte’s statement was “a permissive signal to potential killers that the murder of journalists is acceptable in certain circumstances and would not be punished.”

Panelo asserted that the UN made the statement “on the wrong premise.”

“It is not true that when he made the statement which is wrong in the interpretation of the UN Rapporteur that he was inciting deadly violence. He does not want violence that’s why he entered into peace talks with the communists. He does not want Filipinos killing Filipinos,” he said.

“He will never condone any killings. He will prosecute under the law any person [who] will kill or injure regardless of motive,” he added.

In a press conference on May 31, Duterte linked the killings of some journalists to media corruption.

“Even if you are a journalist, you are not exempted from assassination if you’re a son of a bitch,” he said.

On June 2, in comments to reporters in Davao City, Duterte said freedom of the press was not a protection for corrupt journalists.

“You cannot invoke free speech. The Constitution cannot help you if you defame someone,” he said when asked how he would deal with the problem of media killings in the Philippines after a reporter was shot dead in Manila in late May.

“Most of those killed, to be frank, have done something. You won’t be killed if you don’t do anything wrong,” Duterte said, adding that many journalists in the Philippines were corrupt.

“If you are a journalist who is doing what is right, nobody will touch you, especially if [what you publish] is true. You cannot hide the truth,” he said.

He cited the case of Jun Pala, a radio commentator and politician who was murdered in Davao in 2003. Gunmen on a motorcycle shot dead Pala, who was a vocal critic of Duterte.

His killing has never been solved.

“I do not want to diminish his memory, but he was a rotten son of a bitch. He deserved it,” Duterte said.

He said he knew who ordered Pala’s murder—someone who was hurt by the journalist’s personal attacks.

“We politicians, we are used to that. But private citizens are different—defame them and you defame their children. They will really kill you. That’s how it is,” he said.

He said there were three types of journalists — the honest crusaders, those in the payroll of private companies,  and those who demand money.

‘Taken out of context’

Duterte’s comments were criticized by civil rights and journalists’ organizations.

Peter Laviña, spokesperson for Duterte’s transition team, said the President-elect’s remarks were “taken out of context, misinterpreted and misunderstood.”

Laviña said national and international media organizations “lapped up” news of journalists’ killings when the headlines should have been the “declaration of war against red tape and unnecessary fees imposed on hapless citizens,” apart from the appointment of new Cabinet officials.

“[Duterte’s] example of most slain journalists being corrupt or involved in shady deals was based on his own assessment of those killed in Davao City and not on the national scale. Certainly, Duterte has no personal knowledge of each and every single case of media killings in many parts of the country,” Laviña said. With a report from PDI