Meralco: Power rates down in June 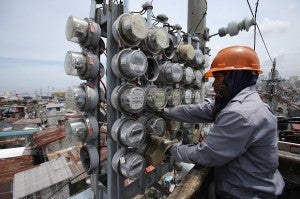 MANILA — The Manila Electric Co. (Meralco) announced that power rates have declined in June, largely because sufficient energy has been available from suppliers, keeping the so-called generation costs down.

The residential rate for a typical household consuming 200 kilowatt-hours (kWh) per month will go down this June by 13 centavos per kWh to P8.32 per kWh, according to Meralco.  This translates to a reduction of around P25 in their electricity bill.

The reduction was due to the downward movement in the generation charge, which more than offset a higher transmission charge, Meralco said.

Charges from the Wholesale Electricity Spot Market (WESM) decreased by 98 centavos per kWh due to lower spot prices driven by the fewer generator outages during the May supply month compared to the previous month. The share of WESM to Meralco’s total power requirements inched up from 11.7 percent to 12.8 percent.

Cost of power from the Independent Power Producers (IPPs) decreased by 22 centavos per kWh. This was mainly due to an improvement in the dispatch of the QPPL coal plant in Quezon province.

Meanwhile, cost of power sourced from plants under the Power Supply Agreements (PSAs) was almost at the same level as last month, with only a slight increase of 2 centavos per kWh.

The share of PSAs and IPPs stood at 46.1 percent and 41.1 percent, respectively.

Meralco said the lower generation charge more than offset an increase in the transmission charge of 6.6 centavos per kWh, due to higher ancillary or reserve power service charges.

Beginning this June and up to November, the transmission charge will include the collection of an ancillary service differential that will go to PSALM.

Taxes and other charges also decreased by a combined amount of around 33 centavos per kWh following the reduction in the generation charge.

Meralco’s distribution, supply, and metering charges, meanwhile, have remained unchanged for 11 months, after they registered a reduction in July 2015. Meralco has said it does not earn from the pass-through charges, such as the generation and transmission charges.

With the onset of the rainy and typhoon season, Meralco has urged customers to practice some safety tips that could help prevent accidents from happening.

One of the first things customers would do well to ensure when there is imminent flooding is to ensure that the main electrical power switch or circuit breaker is off, Meralco says. They must unplug appliances from wall sockets and turn off permanently connected equipment and unscrew all light bulbs if possible.

When flooding subsides, customers may check affected equipment and remove mud and dirt from main circuit breaker/fuse and its enclosure using rubber gloves and rubber soled shoes. Customers must also make sure that all electrical wires, connectors and other wiring devices are completely dry.

Especially after severe flooding, customers should have a licensed electrician check all electrical wires and accessories, including appliances that have been submerged in floodwater, before turning power on and using them again, Meralco said.