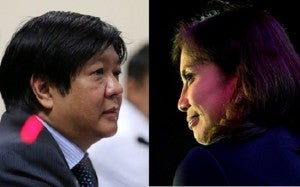 MANILA — Alleging the use of a “fourth server” to transmit election results, the camp of Sen. Ferdinand Marcos Jr. said on Tuesday he would file an electoral protest to reverse the proclamation of Vice President-elect Leni Robredo by the end of the month.

Jose Amor Amorado, head of Marcos’ legal team, alleged that the results of the voting were coursed through a “4th server” or a “queue server” instead of being transmitted directly to the Municipal Board of Canvassers server, the Commission on Elections server, and the transparency server.

Marcos lost to Leni Robredo by about 263,000 votes in the race for the vice presidency.

Amorado said they have been targeting to file theprotest on June 28, a day before the June 29 deadline.

A press release from Marcos’ office quoted Amorado as telling reporters that, “Yes, definitely we will file an election protest. The truth has to come out – one way or another.”

The protest will seek a recount of the votes in several areas, as well as the setting aside of the election results in areas where there are clear indications of election fraud and manipulation, according to Amorado.

Marcos’ lawyer said their initial findings indicated that between 9 p.m. and 10:10 p.m. on May 9, the transmitted election results showed that Marcos lost in 1,689 precincts, many of which were considered bailiwicks of the senator, mostly in the provinces of Leyte, Samar, Pangasinan and other areas in the Cagayan Valley region.

The Marcos camp had asked the Comelec to preserve and secure any and all servers, as well as other related IT equipment used in the elections, he added.

Abakada Rep. Jonathan dela Cruz, Marcos’ political adviser, said the so-called fourth server was never made public or subjected to a source code review, which was what had been done with the other servers.

Dela Cruz also said Marcos wanted to file the protest, thinking that he owed it to his supporters and the Filipino people to find out what happened in the elections.

“We believe that we have enough evidence to show that there was massive rigging and manipulation of votes,” he said.

Earlier, the Marcos camp had complained about Smartmatic’s alteration of a script in the transparency server, alleging that after the script change, Marcos’ lead over Robredo started eroding until he was eventually overtaken.

Comelec and Smartmatic officials had said that the change in the script only produced a cosmetic effect, which was to correct the spelling of a candidate’s name.  SFM