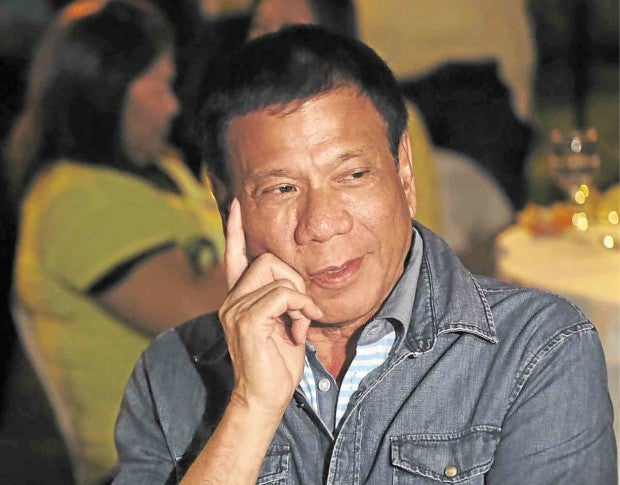 DAVAO CITY, Philippines—It looks like the media and the public will have to learn to cope with Dutertespeak, or so his apologists say.

Rodrigo Duterte on the campaign trail before the May 9 elections had made many controversial statements.

A day after his proclamation as the country’s 16th President, he rambled on for two hours in a press conference carried live by all major TV networks on evening prime time, justifying the murders of journalists who he said were corrupt, among many other out-of-whack comments and antics, igniting a local and international firestorm.

During the campaign, Duterte’s remarks that he should have been first in assaulting an Australian missionary who was gang-raped and killed during a 1989 prison riot sparked indignation from diplomats.

“We need a little understanding. He does not have any bad intention,” Vitaliano Aguirre II, Duterte’s designated justice secretary, said on Thursday.

“He uses hyperbole to attract attention to what he wants to say… He intentionally exaggerates, like during the campaign. You have to give him some leeway… so his statements can be interpreted so that it could be toned down,” Aguirre said when reached by phone.

He said part of Duterte’s winning edge was his use of “exaggerated” language: “That’s what made him win.”

Duterte has not only drawn public outrage for justifying the murders of journalists, but also for wolf-whistling and singing at a television reporter during his press conference on Tuesday.

READ: Duterte: Whistling is not a sexual thing

The longtime mayor of Davao City did not attend his proclamation, sticking to his personal tradition of shunning such formalities.

Aguirre said Duterte even advised his incoming Cabinet members to learn how to decipher him, recommending a book about reading the mind of the President. Aguirre could not recall the book’s title.

Designated presidential spokesperson Salvador Panelo said Duterte’s statement on the killings of journalists that had earned the Philippines world notoriety as one of most dangerous places on earth for journalists was “taken out of context, misinterpreted and misunderstood.”

“I did not think there was a mistake in what he said,” Panelo said.

“If there’s corruption in the media, it’s like he’s saying maybe you should clean up your own ranks,” he told reporters on Wednesday.

READ: Duterte to journalists: Do not cover me

Panelo described Duterte’s language to be “playful but truthful.”

“He’s very transparent. He says what he feels. And that’s the good thing about him,” Panelo said of his boss known for his tough stand against crime and corruption.

Asked if he saw the need for Duterte to hold his tongue, Panelo said: “What I see is that President Duterte doesn’t need to be pointed out that he did this thing. He discerns himself, and when he realizes that his statement has been taken out of context, he explains it. Or, if for instance he was misquoted, he clarifies it … If he thinks his playful statements have been made to be very serious ones, he tells us.”

“I don’t think he made any declaration that it’s fine to kill media people who are corrupt. I saw the clipping. What I heard is that the journalists were killed because they were corrupt, that was probably the reason but not the only reason,” Alvarez said in a press conference during the signing of a coalition agreement between PDP-Laban and the National Unity Party on Thursday.

“It was just a statement, nothing personal about it.  It’s more of an observation that became a comment,” Alvarez said.

Last week, Duterte warned reporters not to take his statements too seriously, saying he was “enjoying my rudeness” and that he had been used to horsing around with the local media.

Fr. Jerome Secillano, executive secretary of the Catholic Bishops’ Conference of the Philippines committee on public affairs, warned against Duterte’s pronouncements about journalists.

“Duterte’s propensity to advocate killing is a matter about which we Filipinos should be alarmed,” Secillano said.

“His statement against the media is a form of threat and intimidation. Granting that there are corrupt media practitioners, the State and whosever, do not have the right to execute them without due process,” he stressed.

In a text message to the Inquirer, Secillano said it would serve the incoming President well if he strengthened the media as a partner for good governance.

“But it is also a challenge to the media to be an incorruptible institution and be authentic proclaimers of truth,” the priest added.

Secillano said it would be better if Duterte channeled his toughness into strict implementation of the law.

“He should make our justice system work efficiently and effectively,” he said.

The Catholic Church has also been in Duterte’s cross hairs, describing the hierarchy as “hypocritical” and calling bishops “sons of whores.” With reports from Gil C. Cabacungan and Tina G. Santos/TVJ