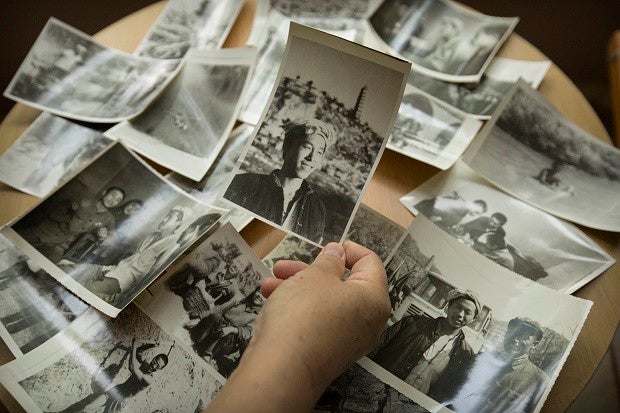 In this Friday, May 13, 2016 photo, Wang Keming holds a photo of himself as a youth at his home in Beijing. As a teenager, Wang felt nothing but contempt for the older peasant his village singled out for collective persecution in 1970. Stirred by Mao Zedong’s radical ideology and inured to the rampant violence of China’s Cultural Revolution, he beat the man bloody and saw nothing wrong with it. Decades later, Wang felt something that few of the millions of people who committed abuses have publicly acknowledged: guilt. He expressed remorse to his victim and later he shared his apology in a national journal. AP

BEIJING — As a teenager, Wang Keming felt nothing but contempt for the older peasant his village singled out for collective persecution in 1970. Stirred by Mao Zedong’s radical ideology and inured to the rampant violence of China’s Cultural Revolution, he beat the man bloody and saw nothing wrong with it.

Decades later, Wang felt something that few of the millions of people who committed abuses have publicly acknowledged: guilt. He expressed remorse to his victim and later shared his apology in a national journal, in what is believed to have been the first public apology by anyone for personal acts committed during the Cultural Revolution’s violent decade.

“I realized that what I did was an individual political act, and I must take responsibility for it,” the retired newspaper editor said in an interview at his suburban Beijing home. “Otherwise, my heart would be troubled for the rest of my life.”

Since Wang’s 2008 public apology, dozens of other participants have accepted responsibility and shown contrition. The vast majority have not, though an entire generation was almost wholly caught up in the events. About one million people were estimated to have died from execution, persecution, extreme humiliation, factional warfare and savage prison conditions — often at the hands of their fellow country people.

The Communist Party, which still rules China with an iron fist, also has yet to apologize five decades after Mao launched the movement to realize his radical communist egalitarian vision.

The party closed the book on the era in 1981 without holding Mao responsible or apologizing. It called the movement a “catastrophe” caused by mistaken policies and a few self-serving political radicals. A further re-examination of the decade might further threaten its legitimacy to rule; last month’s 50th anniversary of the beginning of the Cultural Revolution was met mostly with stony official silence.

Advocates of greater openness say that without an honest accounting, wounds will never heal and the movement’s unaddressed history will impede China’s political development. Xu Youyu, a liberal Chinese intellectual, said that by failing to admit its mistakes, China’s leadership set the wrong example.

“Such an attitude has affected the masses, giving individuals an excuse not to apologize, because those with graver mistakes have not said sorry,” Xu said.

Wang was among millions of city youths sent to the countryside at the height of the Cultural Revolution in 1969. By then, schools had been shut down and urban teenagers were wandering the streets with little to do but pick fights with each other, so Mao sent them away, ostensibly to spread revolution and learn life lessons from the peasantry.

Wang found himself in Yujiagou in northern Shaanxi province, a stark area of loess hills where he would be forced to endure back-breaking work plowing fields of buckwheat, millet, wheat and sorghum on the arid slopes.

“I really wanted to join the revolution. I thought it was a meaningful thing,” Wang said. “The collective education instilled in me had sowed hatred in me against enemies.”

He never had a second thought about using violence. “Revolution is violence,” he said, citing a common saying from the Cultural Revolution years.

“Since I slacked off in farm work, maybe I could make up for it by my zeal in the political movement,” he said.

So, when the village picked peasant Gu Zhiyou to meet its quota of bad elements, Wang enthusiastically joined the farce of shaming the man, whose alleged revolutionary crimes had included quoting an ancient Chinese proverb linking a weather pattern to mass deaths. His critics said Gu was hoping for an invasion by what was then the Soviet Union, whose relationship with China had soured.

At an Aug. 14, 1970, denouncing session, Wang shouted slogans against Gu. The group took a break, and Gu sat on a grindstone in the shade of a tree, but Wang felt a need to continue hounding the man.

“But every word I heard (from him) was defiant, and I told myself, ‘You can’t be kind to enemies.’ So I suddenly shouted, ‘You are still resisting,'” Wang wrote in his public apology. “I stepped forward, raised my right arm and slung it at him. I hit his face with my fist.”

Gu was left splayed on the grindstone, his nose and mouth bleeding. “I was a bit taken aback that I beat him to the point of bleeding, but then I told myself, ‘He is an enemy, and I can beat him as long as he is an enemy.'”

Wang Keming remained in Yujiagou for several years and even worked alongside his victim, who was kind to him.

Wang said he felt a tinge of sorrow but quickly justified his actions as being part of the revolution. “I kept coming up with reasons for my act, but my inner conflicts only grew worse.”

In 1978, Wang returned to Beijing. He worked as a laborer, then landed a job at a newspaper. He later devoted himself to studying the dialects and folk cultures of northern Shaanxi.

Wang came to realize the Cultural Revolution was a mistake, and later concluded that he bore personal responsibility.

“When we put collective values ahead of individual values, there can be no place for human rights, and no respect for humanity,” Wang said. “Because of people like me, a totalitarian regime gets to be stable.”

In 2004, Wang apologized to Gu, who died four years later.

“Hey, it was a political movement,” Wang quoted Gu as saying in his 2008 public apology. “You were only a kid and didn’t know anything.”