27 years on, Chinese moms of Tiananmen victims vow to fight 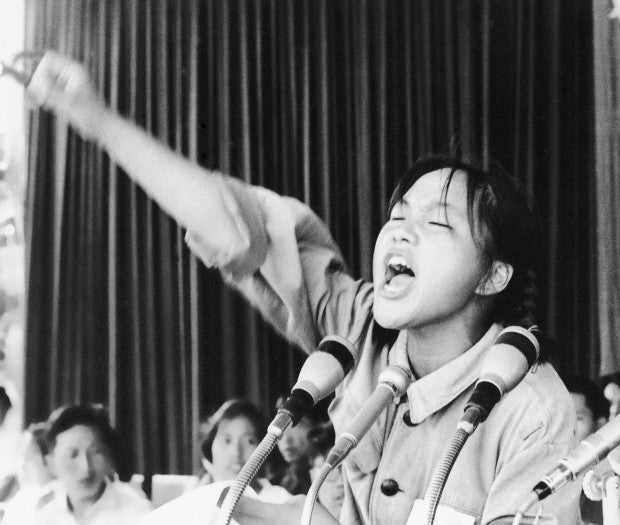 In this file photo taken Aug. 10, 1966, a young woman identified only as Ms Zhou calls out to embolden her fellow Red Guards in Beijing’s Tiananmen Square at the start of the 1966-76 Cultural Revolution. May 16 marks the 50th anniversary of a 1966 party meeting that spearheaded the 10-year Cultural Revolution, a violent and frequently chaotic attempt by Mao to reassert his power and revive his party’s egalitarian ideals. AP

BEIJING—Mothers of some of those killed in the bloody crackdown on China’s 1989 Tiananmen pro-democracy movement are condemning the Chinese government for failing to account for their children’s deaths and vowing to continue pushing for the truth ahead of this weekend’s 27th anniversary of the events.

Signed by 131 mothers and published by the advocacy group Human Rights in China, the letter said victims’ families continue to suffer from harassment and intimidation by Chinese security services for pursuing their quest for justice for their loved ones.

“For 27 years, the police have been the ones who have dealt with us. For 27 years … we, the victims’ families, are eavesdropped and surveilled upon by the police,” the letter said. “The police use contemptible means, such as making up stories, fabricating facts, issuing threats, etc., against us.”

While such treatment “undoubtedly desecrates the souls of those who perished,” the mothers, who along with their families and supporters have become known as the Tiananmen Mothers group over the years, said they were convinced their campaign will eventually produce a full and objective reckoning of the events.

The letter condemns the Chinese government for its apathy, accusing Beijing of ignoring pleas by family members and wiping out public memories of the movement and the bloody crackdown on the night of June 3-4, 1989, in which hundreds, possibly thousands were killed.

The government says it was correct to send in troops and tanks to quell it, saying it was a violent uprising against Communist Party rule, and has rejected all calls for an investigation or even to permit discussion of the events. Most of the main student protest leaders who fled aboard after the crackdown are still forbidden from returning home.

The letter was partially prompted by tightening security following the death of Jiang Peikun, husband of Ding Zilin, one of the most prominent Tiananmen mothers, said Yin Min, a fellow Tiananmen mother and signee of the letter.

“It feels that there’s no end in sight. We are all at ages where death can happen any day, and we’d like to see the truth revealed and justice upheld while we are still alive,” said Yin, whose 19-year-old son, Ye Weihang, was killed in the crackdown.

“We believe we have the obligation and the right to tell the public how we have lived those 27 years and to urge the government to take action,” Yin said over the phone.

Ding, whose 17-year-old son Jiang Jielian died in the crackdown, declined to be interviewed when reached by phone on Wednesday. As the face of the group, she has been subject to the most stringent restrictions.

Each year’s anniversary brings a tightening of such measures, with family members confined to their homes or forced to leave Beijing. Ignored by China’s entirely state-controlled media, they are forbidden from publicly commemorating the deaths of their loved ones.

Despite that, the letter continued to express faith that justice will eventually come.

“We use our immense maternal love to declare publicly to future generations: do not succumb to brute force, confront all evil forces with courage, and justice will prevail,” the letter read.