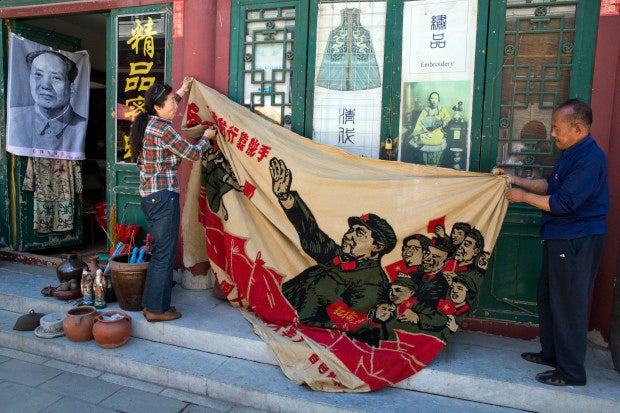 Vendors unfurl a banner from 1969 depicting former Chinese leader Mao Zedong as he “inspects the great army of the Cultural Revolution” and the slogan “Navigating the seas depends on the helmsman” at a curio market in Beijing, China, Monday, May 16, 2016. Exactly 50 years ago, China embarked on what was formally known as the Great Proletarian Cultural Revolution, a decade of tumult launched by Mao Zedong to revive communist goals and enforce a radical egalitarianism. The milestone was largely ignored Monday in the Chinese media, reflecting continuing sensitivities about a period that was later declared a “catastrophe.” AP

BEIJING, China — The mayhem of China’s Cultural Revolution will never be repeated, state-run media said Tuesday, breaking their silence after the 50th anniversary of its start saw little state-sanctioned discussion.

May 16 marked half a century since the 1966 internal Communist party declaration of the movement, which left chaos in its wake and transformed China’s political landscape.

The Communist party restricts discussion of the period to prevent undermining the legitimacy of its rule, with many social media comments censored Monday and most domestic news outlets glossing over the anniversary in their coverage.

Many critics yearn for a full historical reckoning and say that without it the carnage risks being repeated in future, but the state-run Global Times said doing so was unnecessary.

The People’s Daily, the official mouthpiece of the ruling party, which did not mention the anniversary on the day itself, said the country had learned from the event and already moved on.

China “will not and must never again allow an error like the Cultural Revolution”, it said, deeming the campaign “entirely wrong in both theory and practice”.

“History always develops in a forward direction,” it added. “We sum up and absorb lessons from history in order to learn from it and better move forward ourselves.”

In 1981 the Communist Party officially pronounced the Cultural Revolution a grave error that “led to domestic turmoil and brought catastrophe to the Party, the state and the whole people” — a decision the People’s Daily termed “unshakeably scientific and authoritative”.

The resolution ascribed chief responsibility to Mao Zedong, avoiding the question of the party’s own culpability.

But echoes of Maoism and ultra-leftist thought still ripple across the world’s second-largest economy.

Earlier this month, an anniversary concert at the Great Hall of the People stirred controversy for an uncritical presentation of the anthems and propaganda imagery from the period.

The Global Times sought to bury fears of resurgent neo-Maoism,  saying China has learned its lesson from the “permanent pain” of the chaotic decade, which taught Chinese society to “remain vigilant against the danger of all kinds of disorder”.

“Nobody fears turmoil, and desires stability more than us,” it said.