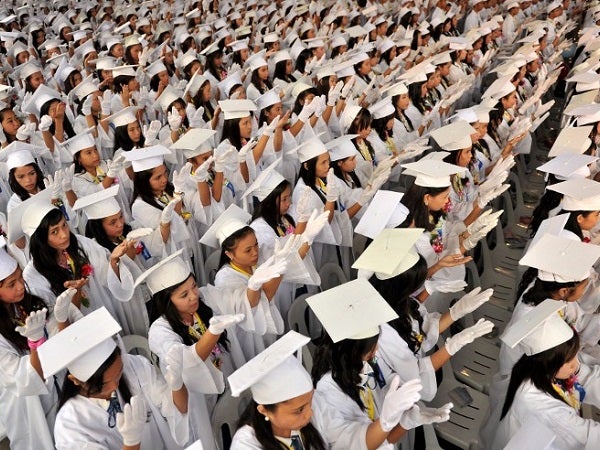 DAVAO CITY — Former national treasurer Leonor Briones, the incoming Department of Education secretary, on Tuesday said she would continue and improve the K to 12 program and provide an alternative learning system to those who would not benefit from the program.

In an interview after President-elect Rodrigo Duterte’s announcement of Briones’ appointment to the Cabinet here, Briones said the opposition is understandable especially from parents who would have to shoulder the increased costs of education due to the two additional years in secondary education.

But Briones said the program is beneficial in the long-term to make the country’s education system at par with the rest of the world, which has 12 years of primary and secondary education.

She said Filipinos abroad face discrimination in the workplace and get lower ranks because they lack two years of secondary education without the K to 12 in place.

(K to 12’s goal is good, to add years of basic education. It’s not a specialty course. K to 12 recognizes that some students who graduate from high school want to work immediately. One way by which you finish your high school is technical vocation.)

Briones said the K to 12 is intended to cover all school children, which means there is a need for a system to include the elderly farmers and indigent beneficiaries who want to study primary and secondary education.

“K to 12 covers the school children, but how about the 25 year-old farmer who is only grade 4, or tricycle driver who’s 50 years old? Hindi naman sila kasama sa program (They aren’t part of the program). We are proposing an alternative learning system. May alternative learning system tayo but it is not funded enough. Maliit lang siya ang program. Dapat palakihin na ‘yan (It’s a small program which needs to be expanded),” Briones said.

“Kasi ‘yung issue sa K to 12, siguradong may maiiwan kasi hindi magka-qualify sa senior high school at saka hindi makakasama talaga kasi may edad na; they will not benefit from training of K to 12,” she added.

(The issue with K to 12 is that there will be some who will be left behind because they won’t be qualified for senior high school and are too old; they will not benefit from training of K to 12.)

She said the program was faced with stiff opposition from parents due to the additional costs of education, but she reminded them that the program would be beneficial in the long term after six years of difficulty in the first phase of implementation.

(The burden here, the opposition, is coming from the parents because they will need to shoulder the expenses… The public knows the side of the parents. There are scholarships, actually, like what we are doing; there’s a dormitory for honor students in need.)

“There will be six years of difficulty during which universities will be suffering, parents will be suffering… But at the end of six years, those who graduate from senior high school will have better opportunities to get good jobs, and they can compete abroad,” she added.

Duterte faced calls from militant groups to stop the implementation of the Republic Act 10533 or “Enhanced Basic Education Act of 2013,” that allowed the K to 12 program which extended secondary education with two more years.

During its first year of full implementation this year, the additional years of primary education displaced tertiary schools of incoming first year students for at least two years.

READ: Primer: What you should know about the K to 12 senior high school

The program aims to make the country’s education system at par with other more developed countries, despite additional cost to families and problems on educational infrastructure.

She was a former Presidential Adviser for Social Development with Cabinet rank and served as a National Treasurer of the Philippines from August 1998 to February 2001. JE