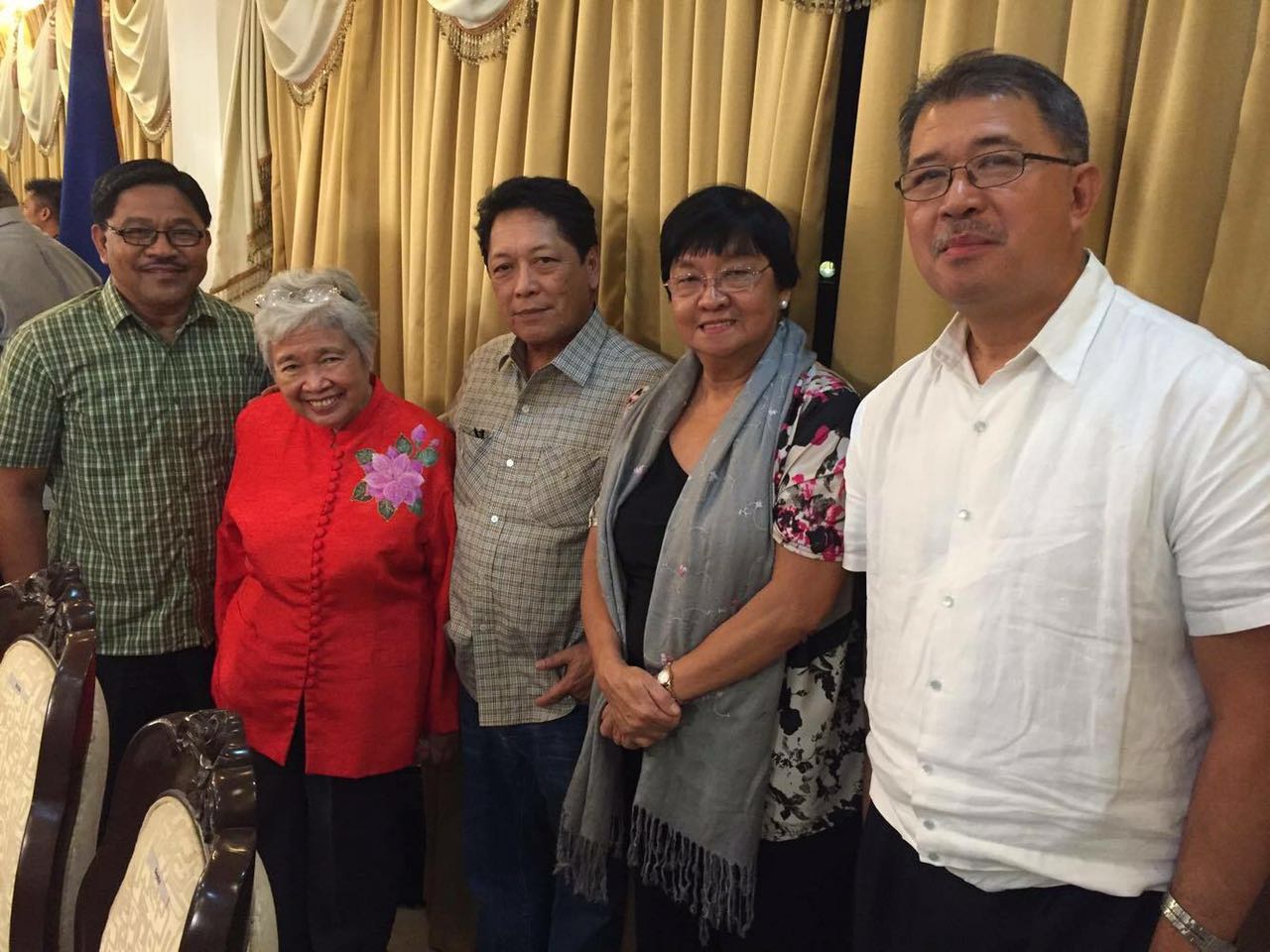 President-elect Rodrigo Duterte on Tuesday night named members of his Cabinet, about less than a month before he assumes office on June 30.

Below are the men and women who will compose the Duterte administration.

Presidential Spokesman, Salvador Panelo: A high-profile lawyer whose client include Andal Ampatuan Jr., a suspect in the infamous Ampatuan massacre. He also lawyered for detained Sen. Ramon “Bong” Revilla Jr., who is facing plunder charges regarding the misuse of his Priority Development Assistant Fund (PDAF).

Executive Secretary, Salvador Medialdea:  A childhood friend of Duterte, he is the son of former Associate Justice Leo D. Medialdea. A lawyer by profession, he finished his Bachelor of Laws from San Beda College in 1976.

He started his career in government in 1998 when he was appointed as the administrator of the Livelihood Corporation (LIVECOR). He was later appointed Presidential Assistant for Political Affairs from July 2000 until October 2000.

Cabinet Secretary, Leoncio “Jun” Evasco Jr: He is the outgoing mayor of Maribojoc town in Bohol and was the national campaign manager of Duterte. Evasco, a former rebel priest, is a long-time chief of staff and close friend of Duterte. The two first met in Davao City when Evasco, who was at that time a New People’s Army rebel, was arrested and detained. Duterte, on the other hand, was a city prosecutor.

Duterte said he trusts Evasco because he is a “principled man.” As campaign manager of Duterte, Evasco planned the overall strategy for the mayor’s 90-day campaign.

Solicitor, General, Jose Calida: He is a former justice undersecretary. He worked as an undersecretary of Department of Justice from March 12, 2001 to Jan. 20, 2004 and as an executive director of Dangerous Drugs Board from Jan. 21 to Oct. 31, 2004.

Presidential Assistant for Visayas, Michael Dino: He will have the rank of an undersecretary. He is a Cebuano businessman and one of the founders of Bisaya Na Pud movement, a group that supported Duterte during the campaign. He graduated from De La Salle University in Manila with a degree in Business Management.

National Security adviser, Hermogenes Esperon: He is a retired general and was the AFP chief of staff of then President Gloria Macapagal-Arroyo.

Department of Foreign Affairs: Perfecto Yasay Jr:  A lawyer and a former chairman of the Securities and Exchange Commission from July 1995 to March 25, 2000. He ran but lost as vice president in the 2010 national elections.

Department of Transportation and Communications, Arthur Tugade: He is a lawyer by profession and was Duterte’s classmate at the San Beda Law School. He was formerly Chief Executive Officer and President of the Clark Development Corp.

Department of Public Works and Highways, Mark Villar:  A businessman by profession. He is a reelected representative of the lone district of Las Piñas. He is the son of former senator real-estate-retail tycoon Manny Villar and incumbent Sen. Cynthia Villar. in the 15th Congress, he chaired the Committee on Trade and Industry.

National Bureau of Investigation, Martin Gierran:  He is the director of the NBI in Region 11.

Department of Interior and Local Government, Mike Sueno: He was a former PDP-Laban national chair and former South Cotabato Governor.

Department of Interior and Local Government undersecretary, Catalino Coy: He is a DILG undesecretary and a former director of the Special Action Force of the Philippine National Police (PNP).

Philippine National Police, Ronald Dela Rosa: He was Davao City police chief from 2011 to 2013 and is a member of Class 1986 of the Philippine Military Academy (PMA) and has earned the trust of Duterte through his hardworking style.

Department of Justice, Vitaliano Aguirre: He is a veteran lawyer and a batchmate of Duterte at the San Beda College of Law. They are also brothers of the Lex Talionis fraternity. Aguirre handled the defense of Hubert Webb in the celebrated Vizconde massacre and rape case. In 2012, he was cited in contempt for cupping his ears with his hands as Sen. Miriam Defensor Santiago was lecturing during the impeachment hearing of former Supreme Court Justice Renato Corona.

Department of Education, Leonor Briones:  She is a Professor Emeritus of Public Administration at the National College of Public Administration & Governance (NCPAG) at the University of the Philippines Diliman. She was a former Presidential Adviser for Social Development with Cabinet Rank and served as a National Treasurer of the Philippines from August 1998 to February 2001

Bureau of Immigration, Jaime Morente: He was a former police chief for Southern Mindanao.

Bureau of Customs: Nicanor Faeldon: He was a former Marine Captain who will head the bureau dubbed by Duterte as “one of the most corrupt” in government. Faeldon was a former ally of Senator Antonio Trillanes IV. He became famous when he and a group of junior officers led the Oakwood mutiny in the Makati Business District on July 2003 during the Arroyo administration.

Philippine Drug Enforcement Agency, Isidro Lapeña: He is a former Philippine National Police Director and is the head of Duterte’s security team during the campaign period.

Department of Labor and Empployment, Silvestre Bello III:Bello served as  a former justice secretary and as solicitor general during the Ramos administration, from September 1996 to February 1998 and again on June 9-30, 1998. Bello is a known human rights lawyer in Davao. He was among those who helped defend former priest and rebel Leoncio “Jun” Evasco, who became Duterte’s city administrator.

Department of Budget and management, Benjamin Diokno: He was the budget secreatry during the administration of then president Joseph Estrada. He also served as Undersecretary for Budget Operations at the Department of Budget and Management, during the administration of President Corazon Aquino. He is a lso an economic professor of the University of the Philippines Diliman.

Department of Energy, Alfonso Cusi: He was former Manila International Airport Authority (MIAA) General Manager.  He also served as head of the Civil Aviation Authority of the Philippines (CAAP) and the Philippine Ports Authority (PPA). He was appointed director general of the CAAP in March 2010 but resigned nine months later after a very public dispute over the appointment without his knowledge of senior management officials at the agency. In 2004, Cusi was implicated in alleged massive electoral fraud involving then President Gloria Macapagal-Arroyo. He was cleared by the Ombudsman in 2012. He is currently chair of the Batangas-based shipping company Starlite Ferries Inc.

Department of Finance, Carlos Dominguez III:  He was the chair of Duterte’s finance committee during the campaign period. Owner of the Marco Polo Hotel in Davao City, Dominguez is a former classmate and childhood friend of Duterte. He is also a former Cabinet secretary of Corazon Aquino and Fidel V. Ramos. He was also former president of Philippine Airlines and Manila Hotel. Duterte trusted Dominguez to head his finance team because “he has a good reputation in the business community.”

Department of Agrarian Reform, Rafael Mariano: He is a apeasant leader and a former Anakpawis party-list Representative. Mariano was among the list of potential Cabinet members submitted by the National Democratic Front (NDF).

National Economic Development Authority, Ernesto Pernia: He is a professor Emeritus of the School of Economics of the University of the Philippines Diliman.

National Risk Reduction and Management Council, Ricardo Jalad: He was a retired general of the Armed Forces of the Philippines.