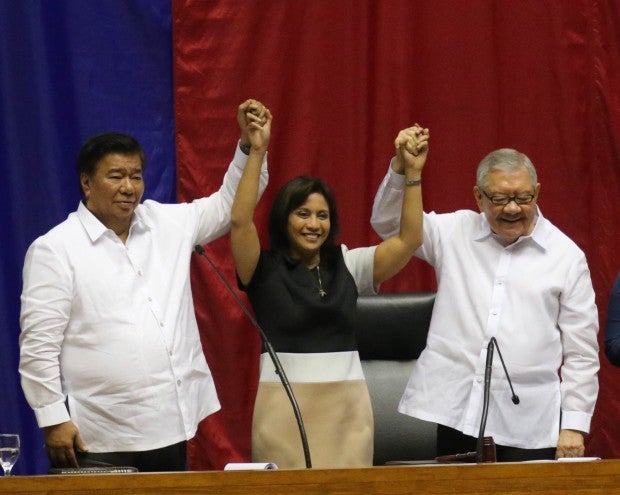 MAY 30, 2016
Proclamation of Vice-President elect Leni Robredo at the Batasang Pambansa in Quezon City.
RAFFY LERMA

Vice President-elect Maria Leonor “Leni” Robredo said that she finds the Coconut Palace, the current residence of outgoing Vice President Jejomar Binay, as too expensive, vowing that she will find a cheaper office space once she assumes office.

Robredo said that she is thinking if it is still logical or prudent to stay in the Coconut Palace, saying that a month’s rent costs the government P500,000.

If she could have her way, the outgoing Camarines Sur representative said that she would want to establish satellite offices to push her advocacy on rural development.

She said that her team is already coordinating with the Office of the Vice President.

Until then, everything is still up in the air, Robredo clarified.

The Vice President-elect first shunned the prospect of living in the Coconut Palace during one of the “INQUIRER.net Q&A” sessions last April. The 51-year-old widow said that she found the place “too ostentatious.”

The Coconut Palace was built in 1978 during the term of former President Ferdinand E. Marcos, the father of her rival Senator Ferdinand “Bongbong” Marcos Jr. It was commissioned by the former First Lady Imelda Marcos as a guest house for Pope St. John Paul II for his visit in the country.

READ: Robredo camp claims will beat Marcos at least by a hairline