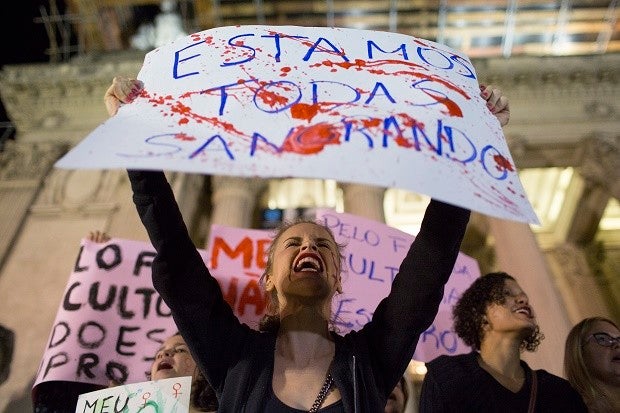 A woman shouts holding a banner that reads in Portuguese “We’re all bleeding” as she protests the gang rape of a 16-year-old girl in Rio de Janeiro, Brazil, Friday, May 27, 2016. The assault last Saturday came to light after several men joked about the attack online, posting graphic photos and videos of the unconscious, naked teen on Twitter. AP

RIO DE JANEIRO, Brazil — Brazilian police on Saturday said they had arrested the first of more than 30 suspects wanted over the gang-rape of a 16-year-old girl whose attackers posted a graphic video online showing the aftermath of their brutal attack.

The arrest came as some 70 military police fanned out across a slum west of Rio de Janeiro in a huge operation to apprehend those suspected of taking part in the assault that has shocked Brazil.

The detained suspect, who was not identified, was being interrogated, said police, who vowed to bring the other alleged attackers to justice.

Social media networks erupted with outrage over the footage posted on Wednesday featuring the girl naked on a bed and the apparent attackers bragging that she had been raped by more than 30 men.

They are suspected of assaulting her on May 21 in Rio de Janeiro, a city stricken by violent crime and which will host the Olympic Games in August.

“Those who committed this heinous crime will be found, will be imprisoned and condemned,” Justice Minister Alexandre de Morais told a news conference in Rio Friday night.

Brazil’s acting president Michel Temer said: “It is absurd that in the 21st century we should have to live with barbaric crimes such as this.”

The video has horrified a country not unused to violent crime.

The UN women’s rights agency condemned the case along with another recent alleged gang-rape of a 17-year-old girl in the northeastern state of Piaui.

“Apart from the fact that these are young women, these barbaric cases are similar in that the teenagers were lured by their attackers in premeditated plots,” UN Women in Brazil spokeswoman Nadine Gasman said on Thursday.

“They were violently attacked in a context of illegal drug use.”

In Sao Paulo, protesters erected a mural with messages including “My body is not yours,” and “I like to wear necklines, that’s not an invitation to rape me.”