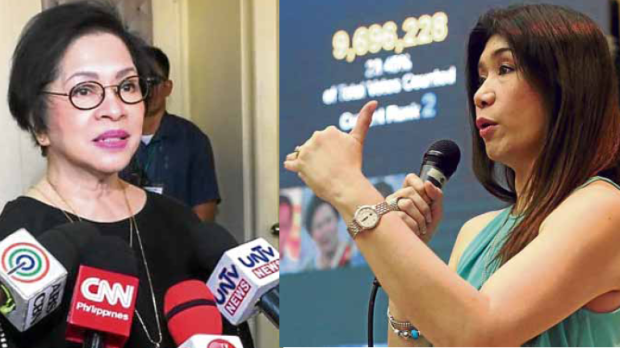 It was all over but the counting, and yet, even as she presided over the parallel count of the Parish Pastoral Council for Responsible Voting (PPCRV) for the last time, national chair Henrietta de Villa was also preparing to pass the mantle to the next generation.

Under her stewardship, the church-based election watchdog, which she cofounded in 1991 with Jaime Cardinal Sin and the late Commission on Elections (Comelec) Chair Haydee Yorac, has grown into a national organization with 700,000 volunteers. It edged out its erstwhile rival, the National Citizens’ Movement for Free Elections, to become the Comelec’s civilian arm for the 2016 elections.

“I’m leaving because [the PPCRV] needs a new face, a young face, and this is the age of technology so it must really move forward along those lines,” said De Villa, 77.

“But what I would really ask the board of trustees, and whoever will take over, is that (the PPCRV) should not become just another ordinary, secular electoral group,” she hastened to add. “It has to be a faith-based electoral group, because that is the extraordinary thing about the PPCRV.”

A former president of the Council of the Laity and once the country’s ambassador to the Vatican, De Villa believes it was her faith that kept her going for the last 25 years.

“My commitment to my country is like my commitment to God, because love of God and love of country can never be separated,” she added. “Commitment based on faith is always stronger, where you can patiently endure.”

And in the contentious world of local elections, there was much to endure in the May 9 national elections.

On May 10, PPCRV volunteer Adela Elmida, was gunned down in Pagadian City while on her way to deliver election returns. Her 12-year-old daughter was injured in the ambush.

Then there were the usual allegations of cheating from losing candidates.

When he started falling behind in the vice presidential race, Sen. Ferdinand “Bongbong” Marcos Jr. pointed to an unauthorized change of script (or computer command) by a Smartmatic technician on a transparency server as a possible avenue for cheating.

Apart from the vituperous campaign, the many last-minute changes in the Comelec’s voting procedures made life more difficult for the PPCRV, according to De Villa’s daughter, Ana de Villa-Singson, 49, the PPCRV’s national communications and media director.

“It’s more of a challenge now because we’re 700,000 volunteers-strong, we’re all over the country, and this is an [archipelago]  so it’s not easy to send communications everywhere,” she explained. “As late as May 3, six days before the election, changes were being made in the procedures. How do you properly cascade the information so that little glitches that turned into big glitches could have been avoided? It requires some preparation.”

A former vice president for marketing at Globe Telecom, Singson joined the PPCRV in 2010. Her name has been mentioned as a possible successor to De Villa when she steps down.

But De Villa was quick to clarify: “We’re not a political dynasty. There’s a process for coming up with the next chair. If (Ana) comes out to be the choice, then it’s up to her.  It’s not like (the position were) an heirloom that we pass on to our family.”

Singson said she joined the PPCRV primarily to help her mother run the organization.  Asked if she was as observant a Catholic as her mother, she laughed.

“No, far from it,” she said. But there are other sources of inspiration, she added.

A fixture at fashion and glamour events, Singson at one point also wrote articles on theater and ballet for Inquirer Lifestyle.  But with the PPCRV, she’s all business, and tends to be as voluble as her mother is phlegmatic, hardly sleeping during the quick count.

“It’s not easy being a volunteer,” she said. “You’re already giving your all—your time, your effort, your passion—certainly you’re not getting paid for it, and certainly you’re doing a lot more than so many armchair critics who are so loose when it comes to bashing or criticizing you. It’s not easy. I’ve tried resigning. I resign every day, my mother knows that. When I’m very, very tired, I resign.”

She added: “But when I’m with people who give so much of their passion, it energizes me. I know it sounds corny, but it’s true. Because it makes you believe that people are fundamentally good. In spite of what you read in the newspapers, Filipinos are good. You just have to give them a chance to channel it and show it, and this is one of the avenues for that.”

Both De Villa and Singson hope to see the PPCRV evolve beyond its current role as an election watchdog and advocate of voters’ education.

“It would be nice if, during the lull between elections, with a ground support of 700,000 volunteers, (the PPCRV) could also be vigilant,” Singson said.

“That’s what happened in Indonesia—[the Corruption Eradication Group] started out as a poll watching group, then they moved into monitoring the elected officials themselves.  Maybe we need to move into that, so (officials) are held accountable not only when they’re trying to win our votes, but also when they’re actually performing their duties. Maybe [the PPCRV] should evolve into a continuing effort.”

“Vote, vote wisely, follow your vote. You cannot just leave it to the public officials after elections. This is the time to demand excellence from our public officials. Change will not happen with them. It must come from the rising of the crowds. It’s the masses who must demand good governance.”

After she gives her final report to the bishops, the PPCRV communications and media officer said she was going “to smell the roses with (her) husband.”