A bizarre twist to ‘Flores de Mayo’ in war on drugs 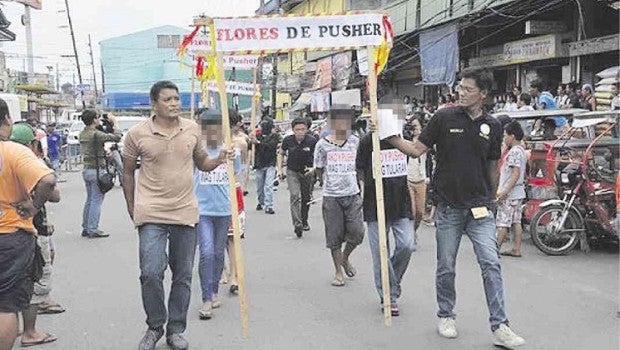 OFFICIALS of the Tanauan City government hold a sign with the words “Flores de Pusher,” as they parade 11 drug suspects arrested in two raids in city villages on Sunday. The public shaming is one of the city government’s measures against criminality, particularly drug trade. CONTRIBUTED PHOTO

THE TRADITIONAL “Flores de Mayo” took a bizarre twist in the city of Tanauan, Batangas province where, instead of the May festival featuring a parade of men and women in their Sunday best, a group of men was paraded in a display by the city government of toughness in the war on drugs.

Instead of hometown lasses in gowns and their consorts, 11 male drug suspects were paraded around the city’s public market and city hall complex on Monday.

Placards with messages that read “I’m a pusher, don’t follow my example” hung from the suspects’ necks.

The suspects walked under arches with red and yellow ribbons and marked with “Flores de Pusher.”

The parade attracted attention with onlookers jeering, some even shouting “You deserve it!”

The latest gimmick in the city government’s antidrug campaign, said city information officer Gerard Laresma, “was just to make it (the campaign) dramatic.”

“But it’s still part of the mayor’s ‘Walk of Shame,’” Laresma said. Walk of Shame is the moniker given to the city government’s unusual way of punishing suspected pushers.

The 11 suspects were arrested in two successive raids carried out by the Mayor’s Anti-Crime Group (MACG) in Barangays Poblacion 3 and 4 on Sunday. It was the second public shaming in the city this month. Seven suspected drug pushers were also subjected to this kind of humiliation last week.

Laresma said nine of the suspects were arrested last week but two were minors so were not made to join the walk.

Tanauan’s shame campaign has drawn the attention of the Commission on Human Rights (CHR). In 2014, Mayor Antonio Halili made a suspected thief walk around the market after he was caught stealing tuyo.

“It was not just a single tuyo, but boxes (of dried fish). We believe he was a member of a syndicate,” Laresma said.

In 2015, another man suspected of stealing cable wires was shamed publicly, while a suspected rapist was also made to walk in shame about two months ago. The city government, after the walk, turns over the suspects to police, who file the charges and detain the suspects.

“The mayor believes this is no different from (crime) suspects being named and (whose faces) are shown on television,” Laresma said. “Remember that these people are recidivists (habitual offenders) and not just petty criminals,” he said.

He said after the suspected thief was paraded in 2014, the number of cases of theft in the public market went down.

In a separate telephone interview, Halili, who had been reelected, quickly dismissed human rights issues being raised against his walk of shame.

“Maybe they should hear what the family of a rape victim had to say,” he said.

He said forming the MACG was the city’s way to help the local police curb criminality. MACG is composed of about 70 civilians, some of them issued firearms by the city government.

The city government also issued 24 motorcycles to MACG and eight to police to run after motorcycle-riding criminals.

Halili said the city had to resort to a “radical” measure as local officials wanted to change the image of Tanauan, an area once known for illegal drug trading.

“I even used to write (drug pushers) letters and invite them to my office. I talked to them and tried convincing them to change their ways. Some listened but others were just really stubborn,” the mayor said.

Asked if he would be willing to implement a “shoot-to-kill” order against criminals, similar to a plan floated by presumptive President-elect Rodrigo Duterte, Halili said: “That’s Duterte’s plan. I won’t oppose that.”