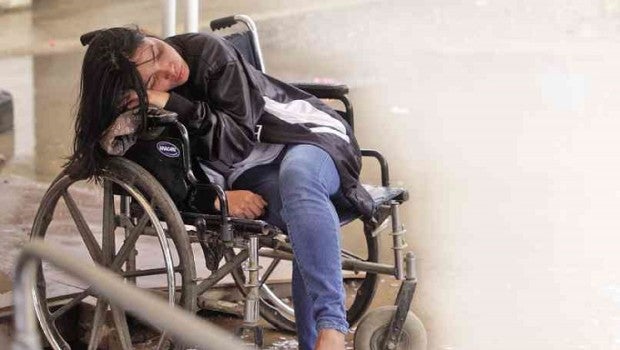 ONE of the victims of an apparent case of food poisoning in Naga City sits in a wheelchair outside Minglanilla District Hospital. TONEE DESPOJO/CEBU DAILY NEWS

CEBU CITY—Many of the 47 persons, who were taken ill in an apparent case of food poisoning in Naga City, are still in a hospital in the town of Minglanilla, Cebu province.

The victims complained of stomach pains and showed symptoms of poisoning, like vomiting and fever, after eating fruit salad at the house of a village watchman in Naga, a city also in the province of Cebu.

Dr. Andres Gestopa of MDH said 11 of the patients had been discharged on Monday and the rest were still under observation.

He said the case was reported to the Department of Health and samples of the fruit salad were taken for tests.

Cruz, chair of the Naga City Disaster Risk Reduction Management Council, said the victims were residents of Barangay Tangke who attended a fiesta celebration in Barangay Naalad in Naga City on Saturday.