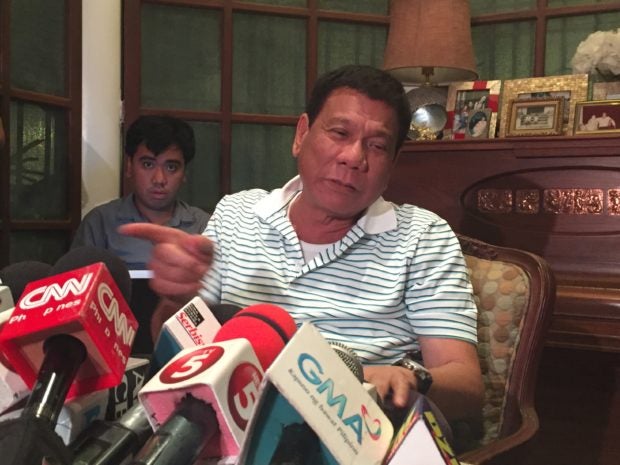 Presumptive President-elect Rodrigo Duterte has expressed his support for the use of medical marijuana but thumbed down calls to allow recreational marijuana.

The tough-talking mayor, whose campaign is hinged on busting drugs and criminality, said that modern medicines already use medical marijuana as an ingredient.

“Medical marijuana, yes, because it is really an ingredient of modern medicine now. There are medicines right now being developed or already in the market that [contain] marijuana as a component but used for medical purposes,” he said in a press conference.

READ: Are you ready to try medical marijuana?

Duterte said that recreational marijuana is still a prohibited item under the law and warned that anyone caught using it will be arrested.

“Yung maghithit ka lang diyan (na) parang sigarilyo (But if you would smoke it like a cigarette), I will not allow it ever…It remains to be a prohibited item and there’s always a threat of being arrested, or if you choose to fight the law enforcement agency, you die,” Duterte said.

Isabela Rep. Rodolfo Albano III has filed House Bill No. 04477 or the Compassionate Use of Medical Cannabis Act in May 2014. Since then, the medical community and the Roman Catholic Church have expressed their views on the issue.

On its part, medical groups, led by the Philippine Medical Association, said that there was insufficient scientific evidence to prove that that use of marijuana was beneficial for some conditions. While the Catholic Bishops’ Conference of the Philippines said that they back the use of medical marijuana for the terminally-ill.

The Department of Health does not reject the use of medical marijuana but said that it will review the bill filed by Albano to counter possible abuse of marijuana.

Aside from his stance on medical marijuana, the incoming president also supported the continuation of the Department of Education’s (DepEd) landmark K-to-12 program.

He said that he backs the move after discussing the merits of the program with DepEd officials.

“I said I was against it early on when it was being implemented. But some of the bright guys in DepEd came to see me here in Davao and explained to me how we are lagging behind our neighbors,” Duterte said. RAM