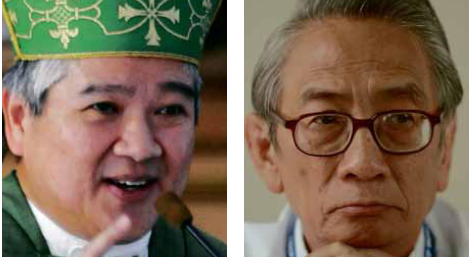 A CATHOLIC bishop on Monday urged presumptive President-elect Rodrigo Duterte to produce evidence against erring clergy so the Church could prosecute them, instead of engaging it in a debate about its “sins.”

Retired Archbishop Oscar Cruz said Duterte should proceed to disclose the wrongdoings of priests and bishops and not worry about the impact of his disclosures, as the Catholic Church had gone through and survived more difficult times.

“If he knows anything, he should reveal these things. It’s OK. The Catholic Church will not fold, because of [his disclosures],” Cruz told reporters in an interview.

In a late-night news conference that dragged on to the early hours of Sunday in Davao City, the trash-talking Duterte blasted the Catholic Church as “the most hypocritical institution” and accused some of its bishops of corruption for asking favors from politicians, including him.

The brash mayor of Davao City also questioned the relevance of the Catholic bishops, citing his overwhelming victory in the May 9 presidential election despite efforts by them to persuade Filipinos not to vote for him.

“Look, were you able to stop me?” Duterte asked, citing his lead of more than 6 million votes over his closest rival.

Sins of the fathers

Duterte then accused some of the bishops of violating their vow of celibacy by getting married or keeping women and seeking favors like cars from politicians.

Once, he said without elaborating, Church officials whom he did not identify forced him to take steps as a mayor so they could obtain a real estate property in a residential enclave in Davao.

Those acts amounted to corruption and violated the constitutional edict of separation of Church and State, according to Duterte, who is known for vulgarity, sex jokes and devil-may-care irreverence.

“Some people here in the Philippines can’t even afford to have food to eat or get medicine while you’re enjoying the money of the goddamn people,” Duterte said. “Aren’t you ashamed of yourselves, you sons of bitches?”

“You know,” he said, “the most hypocritical institution is the Catholic Church.”

Duterte began attacking the Church after saying he had learned that a woman who lived in a slum area across his favorite watering hole, After Dark, had given birth to her 10th child.

He said defying the Catholic Church’s stand against family planning would “do us good.”

“I’m a Christian, but I’m also a realist, so we have to do something about overpopulation,” he said.

Until a day before his inauguration as President on June 30, Duterte said he would continue to publicly disclose “the sins of the Catholic Church and whether or not you are still relevant,” promising to be more circumspect after his proclamation.

Cruz, the judicial vicar of the National Appellate Matrimonial Tribunal, said that instead of challenging the Church to a debate about its sins, Duterte should bring his complaints to the Catholic Bishops’ Conference of the Philippines (CBCP).

The CBCP was preparing a response to Duterte on Monday. Lingayen-Dagupan Archbishop Socrates Villegas, the CBCP president, said the statement would be released today during the ordination of Bishop-elect Enrique Macaraeg at St. John the Evangelist Cathedral in Dagupan City.

“The Church has a built-in mechanism to cleanse its own ranks or the clergy. I know that because that is my  work,” Cruz said. “This mechanism sees to it that churchmen keep their promises and . . . if they violate them, the Church will . . . impose penalty according to [its] laws.”

Cruz added: “If [Duterte] says that he knows some bishops and priests with children or are not doing their jobs, I think he should reveal these and give the proper evidence so that the Church can do something about it.”

Villegas, the CBCP president, declined requests for interviews, saying he did not want his opinion to be interpreted as the position of the conference.

Other clergy, however, said they were saddened and appalled by Duterte’s public condemnation of the Church, something rare in the Philippines, a bastion of Catholicism in Asia.

The attack presages a potentially thorny relationship between the Catholic Church and the incoming administration of Duterte, who shocked bishops in November last year when he called Pope Francis a “son of a bitch” for sparking a huge traffic jam that trapped him for hours during a visit to Manila in January 2015.

Duterte apologized after bishops denounced his action. After the elections, he said he planned to travel to Rome to apologize personally to the Pope, but later said he had scrapped the plan.

At the rehearsal for his ordination, Macaraeg said he was saddened by Duterte’s attack on the Church.

“The Church will continue its mission by critically collaborating with the new government,” said Macaraeg, who will be installed as bishop of the Diocese of Tarlac on May 31.

“We will support its projects and programs that are in accordance with the Gospel,” he said.

Fr. Oliver Mendoza, rector of the Mary Help of Christians Theological Seminary in San Fabian, Pangasinan province, said he was appalled at the way Duterte treated the Church.

“He cursed our respected bishops. The more Christian way is to express what you believe in, what you feel, but in such a way that it will not bring down the dignity of a person,” Mendoza said.

“As Pope Francis has said, the Church is like a hospital that receives and treats anyone who is sick,” he added.

Mendoza said Duterte must have misinterpreted the Church’s suggestions to Catholics on whom they should vote for during the campaign.

“The Church doesn’t stop proclaiming what is right. If we close our eyes, then we are not faithful to the mission of the Church,” he said. With reports from Gabriel Cardinoza, Inquirer Northern Luzon; Nico Alconaba, Inquirer Mindanao; and AP