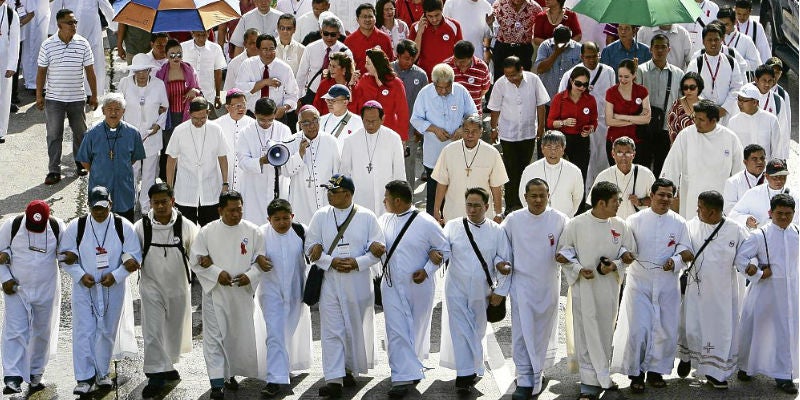 In this December 12, 2012 file photo, bishops, priests and seminarians lock arms as they march to the House of Representatives to watch the vote on the reproductive health (RH) bill. The march was also led by anti-RH lawmakers. MARIANNE BERMUDEZ

DAVAO CITY—Incoming President Rodrigo “Rody” Duterte has blasted the country’s dominant Roman Catholic Church as “the most hypocritical institution” and accused some of its bishops of corruption for allegedly asking favors from politicians, including him.

In a late-night news conference that dragged on to early Sunday morning, Duterte questioned the relevance of Catholic bishops, citing his overwhelming victory in the May 9 presidential election based on an unofficial count despite efforts by them to persuade Filipinos not to vote him.

Duterte cursed the bishops, calling them “sons of bitches” and accusing them of benefiting from public money while the poor could not even afford to eat and buy medicine.

The condemnation of the Church was made after Duterte learned that a woman who lived in a squatter community just across his favorite watering hole, After Dark, had given birth to her 10th child.

He said defying the Church stand against family planning “will do us good.”

“I’m a Christian, but I’m a realist so we have to do something with our overpopulation,” he said.  “The religious sector, I’m sorry, your fundamental beliefs do not solve the problems of the country.”

Duterte said the government’s population control program was “not moving because every President has deferred to the stand of the Catholic Church.”

He slammed politicians for not challenging Catholic doctrine.  “I will defy the opinion or the belief of the Church,” he vowed.

Duterte said the May 9 election was a “referendum between me and the Catholic Church.”

“Look, were they able to stop me?” he asked.

He warned against being pushed to the wall by the Church. “If I start to name the bishops who got married or have women in their lives, the Catholic Church will explode,” he said.

“You asked so many favors, even from me. I can show you the letters,” Duterte said. With reports from AP; Nico Alconaba, Inquirer Mindanao