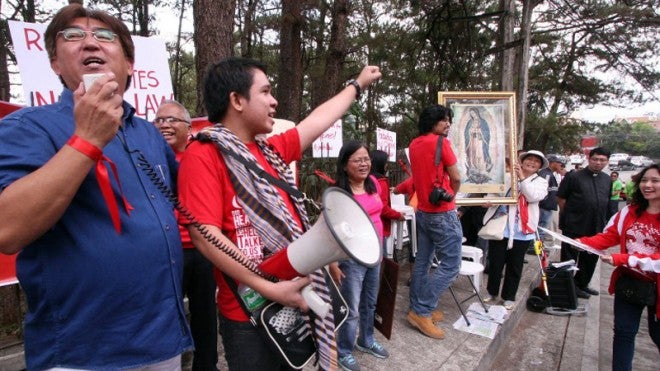 Opponents of the controversial Reproductive Health (RH) law react in front of the supreme court’s summer residence in Baguio City on April 8, 2014, after the court declared it as not unconstitutional. AFP PHOTO

MANILA, Philippines—Both camps—the red shirts (anti-reproductive health law) and the purple shirts (pro-RH law)—claimed victory after the Supreme Court announced that the law was constitutional, except for provisions that penalize health workers, religious facilities or government employees who refuse to enforce it.

Lingayen-Dagupan Archbishop Socrates Villegas, president of the Catholic Bishops’ Conference of the Philippines (CBCP), said the decision of the Supreme Court “truly watered down” Republic Act No. 10354, or the Responsible Parenthood and Reproductive Health Act of 2012.

“Although the Supreme Court has upheld the constitutionality of the RH law, it has truly watered down the law and consequently upheld the importance of adhering to an informed religious conscience even among government workers.

“It has also stood on the side of the rights of parents to teach their children,” Villegas said in a statement.

Sen. Miriam Defensor-Santiago, one of the sponsors of the RH law, expressed thanks to the high court for its decision.

“Thank you, Supreme Court! I love you, because you have faced the fears of a nation and swept them away like cobwebs,” she said.

“The Supreme Court opinion is, to quote a landmark case, ‘a decision upon clashing interests resolved exclusively by the force of reason, according to law, without the power of armies, the weight of patronage, or imposing pomp.’”

“In short, it is a triumph of reason over superstition,” Santiago said in a statement.

Senate President Franklin Drilon said the ruling was “a big victory for the Filipino people who had patiently waited for 14 long years for the passage of the RH law.”

The decision also elated Speaker Feliciano Belmonte Jr., who said that “while there may be provisions that have been limited in scope, the core of the law remains intact.”

In a statement, Health Secretary Enrique Ona said it was “an amazing day for family planning advocates in the Philippines as we saw a huge victory with the decision of the Supreme Court.”

Former health secretary Ezperanza Cabral, a supporter of the RH law, said the provisions thumbed down by the court would not affect the law.

“It is still a complete victory,” said Cabral, who is a convenor of the Purple Ribbon for Reproductive Health.

Cabral, actress Giselle Toengi and tour guide Carlos Celdran joined a vigil outside the Supreme Court compound in Baguio City that was led on April 8 by the Forum for Family Planning and Development.

Cabral said the victory of the RH law was “a victory of women, youth, family and the future of the Filipino.”

“This is respect to the wishes of the majority,” she added.

“I am extremely happy…. The gist of the RH bill is intact,” said Sen. Pia Cayetano, one of the authors and outspoken defenders in the Senate of the RH law.

“This victory is really for the women who cannot afford. This is for the poor women who do not have the ability to access their own information and services,” she said.

Cayetano said the objective of the RH law—giving the poor access to reproductive health tools and education—may still be implemented even without the provisions that the Supreme Court found objectionable.

“As an athlete, it’s just like spraining my finger,” Cayetano told reporters.

Albay Rep. Edcel Lagman,  who has been pushing for the RH law over the past 15 years, said that the few provisions whose constitutionality were not upheld would not diminish the efficacy of the law and deter its full implementation.

Lagman pointed out several provisions that remained untouched by the judicial scalpel:

— Procurement of family planning supplies by the Department of Health for distribution to local government units;

— Provision of age- and development-appropriate reproductive health education to adolescents in all schools;

— Public awareness and nationwide multimedia campaign for the protection and promotion of reproductive health and rights; and

— Inclusion in the Philippine National Drug Formulary of hormonal contraceptives, intrauterine devices, injectables and other safe, legal, nonabortifacient and effective family product and supplies as determined by Food and Drug Administration.

“This monumental decision upholds the separation of Church and State and affirms the supremacy of government in secular concerns like health and socioeconomic development,” said Lagman in a statement.

Pro-Life Philippines Foundation, one of the litigants that contested the RH law, also claimed victory.

Lito David, Pro-Life board member and spokesperson, said the court had struck down two provisions that the Church had used to argue for the law’s nullification.

“First, [the court ruled against] the provision on family planning services which means if [the government] cannot provide these, they are not entitled to have the budget. So, no money. Second, we cannot be forced to follow a law [to which we] are against, which means we cannot be penalized. The law is therefore toothless,” David said.

He said the decision satisfied the “community of conscientious objectors to the RH law.”

“We look forward to the long-delayed implementation of this law, which we believe is also a very critical component to the overall strategy for poverty reduction and achieving sustainable and inclusive growth,” Makati Business Club executive director Peter V. Perfecto said in a text message.

Gregorio Santillan Navarro, Management Association of the Philippines president, said the ruling was a move forward.

University of the Philippines law professor Elizabeth Pangalangan said she was glad that the high court had recognized that the law had gone through 14 years of rigorous debates.

“It is a law that respects and promotes the right to informed choice of women and men, and the government’s obligation to ensure that there are adequate counseling, services and supplies to help them carry out these decisions,” she said.

Nancy Northup, president of the Center for Reproductive Rights, hailed the Supreme Court decision because “millions of Filipino women will finally be able to regain control of their fertility, health and lives” with universal and free access to modern contraceptives.

“The reproductive health law is a historic step forward for all women in the Philippines, empowering them to make their own decisions about their health and families and participate more fully and equally in their society,” she said.

The UN Population Fund welcomed the court’s decision, saying it “recognizes the basic human right of Filipinos to reproductive health.”

“The full and speedy implementation of the law will be critically important in reducing maternal mortality and ensuring universal access to reproductive health care,” it said, citing the “consistently high” maternal mortality ratio of 52 deaths per 100,000 live births in the country.

Eden Datinguinoo, head of the Philippine NGO Council for Health, Population and Development, was elated. “Finally we got it,” she said of the high court decision.

Romeo Dongeto, executive director of Philippine Legislators’ Committee on Population and Development Foundation Inc., said that the group would be talking to its lawyers on how it would address the eight sections of the RH law that the court struck down.

Fr. Melvin Castro, executive director of the Episcopal Commission on Family and Life of the CBCP, said he had anticipated the decision, which he described as a “bittersweet” outcome because the Church wanted the whole law stricken down.

“Si Lord, when He was crucified, lost in the courts. The court of [Pontius] Pilate and the court of [Joseph] Caifas (the high priests of the Sadducee court who put Jesus on trial, according to the Bible), and public opinion where people shouted that he should be crucified,” Castro said.

Church members tied red ribbons around the fence surrounding a tree park in Baguio City, and put up posters indicating their assertion to seek “justice for the unborn.”

Devotees also prayed the rosary in front of the portrait of the Virgin Mary, while everyone waited for the court to end its session.

Catholics in red shirts, armed with the image of Our Lady of Guadalupe, and proponents of the RH law who wore purple shirts and headbands lined the street outside the Baguio compound of the Supreme Court on Tuesday while the justices deliberated on the law’s constitutionality.

Pro-life advocates in the Visayas vowed to continue fighting the law, which they described as “immoral.”

“May God forgive them,” said Fr. Amadeo Alvero, Palo Archdiocese spokesman, referring to the justices who voted in favor of the RH law.

He said the ruling would not change his conviction that the “RH law is not a law willed by God but a law made by antilife people.”

Bacolod Bishop Vicente Navarra said the provisions that were thumbed down by the high court should be considered a little triumph.

“We need to take action and careful study and strategic pastoral response on this, because this battle is not over yet,” he said.

“In fact, it has just begun and the event today only makes us stronger.”

But Villegas, in his statement, said it was time to move on. The CBCP president asked critics and supporters of the RH law to move on following the court’s decision.

“We cannot see eye-to-eye with our pro-RH brethren on this divisive issue but we can work hand-in-hand for the good of the country. Let us move on,” he said.

He urged the Catholic faithful to maintain respect for the high court following its decision.

“The Supreme Court has decided on the RH issue based on existing laws in the Philippines. The Church must continue to uphold the sacredness of human life, to teach always the dignity of the human person and to safeguard the life of every human person from conception to natural death,” he said.

In Baguio City, the pro-RH advocates marched on Session Road to celebrate immediately after the Supreme Court decision was announced.

Read Next
Man hurt, 29 houses damaged by tornado in Cebu City
EDITORS' PICK
10 Filipinos positive for COVID-19 in UK, 7 in Ireland — envoy
Nograles: Cabinet members to donate 75% of monthly salary to aid COVID-19 fight
Quick chat with Nicole Andersson: ‘You really don’t need much to be happy’
IATF to LGUs: Issue ordinances vs attacks on frontliners, COVID-19 patients
Diokno to Duterte: OK to make fun of buck tooth, but focus on people’s needs first
Robredo spox thanks Duterte for defending VP’s efforts vs COVID-19
MOST READ
Coronavirus hotbed Rizal to shut borders on April 6
Gov’t mulling quarantine period extension of 15-20 more days
ADB warns PH against prolonged lockdown
Sotto on Isko Moreno’s call: We do our job without the media following our every move
Don't miss out on the latest news and information.