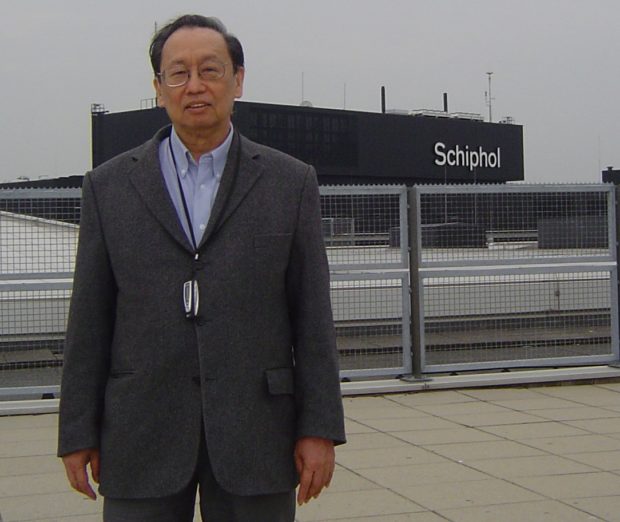 JOSE Ma. Sison at Schiphol airport in The Netherlands: Ready for peace talks and a life of peace for other communist rebels. ARLYN DE LA CRUZ/CONTRIBUTOR

Communist rebels led by Jose Ma. Sison and representatives of the Aquino administration have signed what was described as an “interim peace agreement” that may serve as a stepping stone to a permanent pact with the incoming Duterte administration.

Members of a government delegation, sent by President Aquino in 2014 to The Netherlands to hold back-channel talks with leaders of the communist-led National Democratic Front of the Philippines (NDFP), gave the Inquirer a copy of the document, titled “Joint Agreement on the Resumption of the Formal Talks on the Peace Negotiations between the GPH (Government of the Philippines) and the NDFP.”

A member of the government delegation said many officials involved in the talks were surprised that Sison signed the document, adding that the acknowledged founder of the Communist Party of the Philippines (CPP) has not signed any document resembling an agreement with the Philippine government following the collapse of peace talks under then President Corazon Aquino.

The delegations said the document, signed on Dec. 8, 2014, was a strong indication that the NDFP was not only willing to enter into a peace agreement but was also ready to embrace a life of peace for communist rebels, both armed and unarmed.

According to the document, the parties agreed to:

Reaffirm the 1992 agreement, called The Hague Joint Declaration, between the government and the NDFP, which became the framework for the start of formal peace talks, and specified that no conditions must be imposed on either party to start the talks.

Accelerate the pace of formal peace talks by forming smaller “reciprocal working groups” that would hammer out political and constitutional reforms, end to armed hostilities and what to do with members of the CPP armed wing, the New People’s Army (NPA).

Draft and sign an agreement on “truce and cooperation”  that would immediately lead to a cessation of fighting and would last depending on a timetable to be determined by the government and NDFP negotiators.

Give priority, during the duration of the truce, to negotiations on a Comprehensive Agreement on Socioeconomic Reforms, which would list down the measures needed to achieve social justice, like a new land reform program and programs to bring about industrialization.

Immediately convene working committees on social, economic, political and constitutional reforms that would give flesh to general agreements on social justice, economic equality and human rights. According to the document, the NDFP and back-channel negotiators set January 2016 as the target completion date for agreements on these issues.

Copies of the document have been furnished President Aquino and the Office of the Presidential Adviser on the Peace Process. The latest recipient of a copy of the document is Rep. Silvestre Bello III, who has been named by presumptive President-elect Rodrigo Duterte as head of the peace panel that would negotiate with the NDFP.

According to a delegation member in the 2014 talks, the document is virtually a peace pact which needed only official imprimatur.

“This is it,” said the member, who requested anonymity for lack of authority to disclose details of the 2014 talks.

Another delegation member, who also spoke on condition of anonymity, said what set the 2014 interim agreement apart from previous agreements is that NDFP “made a lot of concessions.”

“They were not even calling for the release of all (rebel suspects), only those involved in the peace process,” said the member, who had taken part in talks with the NDFP under previous administrations.

He said that while there was mention about the US government’s classification of the NDFP, CPP and NPA as terrorist organizations during the back-channel talks, this was not even discussed in the drafting of the interim agreement.

“They (NDFP leaders) did not demand it (to be removed from the US terror list),” said the delegation member.

Another breakthrough in the 2014 negotiations, he said, is an agreement to hold marathon discussions to fast-track the peace process. “Like a conclave,” he said, referring to the process of electing a Pope.

He said there would have been a “national, indefinite ceasefire” had the interim agreement been followed quickly by a formal signing.

There was also an agreement to hold discussions by the smaller working groups simultaneously to fast-track the process. “Everything would be tackled in one fell swoop,” he said.

The interim agreement has been shown to military officials, according to the source. “They were OK with it,” he said. “They did not revise anything.”

The 2014 talks were described as a success compared to previous government attempts to restart formal discussions with the communist leaders.

The delegation led by Braganza laid the groundwork for its trip to The Netherlands by talking first with communist leaders in the Philippines, among them NPA leaders based in Mindanao.

It took five trips to The Netherlands before the interim peace document was signed, according to the sources.

The back-channel talks took so much time that “so many Marlboros (cigarettes) had been puffed,” said one delegation member referring to how the negotiators spent break times.

While the document signed by Sison and other NDFP leaders may be still a step away from a formal pact, it should be used by the incoming government negotiators as a take-off point. “This is already a good deal,” said one of the delegation members.

“All that is needed is to make this formal,” he said.