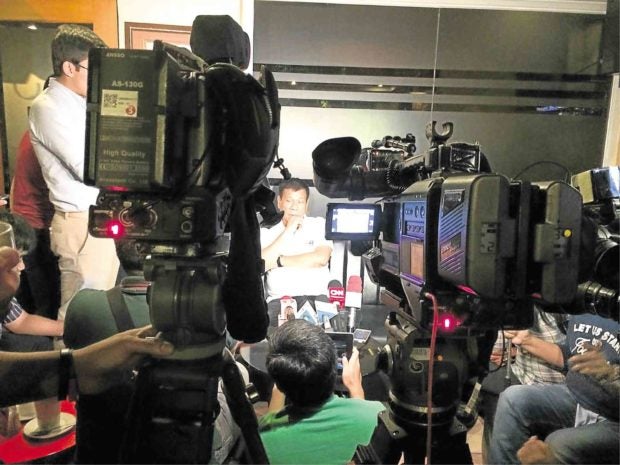 PRESUMPTIVE President-elect Rodrigo Duterte talks to reporters late on Saturday at “After Dark,” a bar that has become his favorite hangout since it opened. NICO ALCONABA/INQUIRER MINDANAO

DAVAO CITY—Journalists who will be covering Malacañang after June 30 should start adjusting their body clocks.

Presumptive  President-elect Rodrigo Duterte told a press conference that started a few minutes before midnight on Saturday that he would be maintaining his usual practices and working hours when he was mayor of Davao.

Duterte said he would be a “very approachable president” and entertain any questions from journalists.

He said he would stop the practice in presidential press conferences where questions are prescreened or prearranged.

“You just ask me. There will be no prearranged questions,” Duterte said. But he said there should be no questions on his personal life.

The incoming president said he would not have journalists tagging along on his trips as he would be taking commercial flights.

For the press office, Duterte said there would be only one office and one spokesperson, whom he had identified as lawyer Salvador Panelo.

Duterte said journalists should not be intimidated by his strong  personality.

Duterte is known among Davao journalists as someone who is fond of pranks. He also jokes about threatening to push reporters from a window, punching them or even killing  them.

His joke drew loud laughter from members of the press.

During the May 16 press conference, the first since he was sure of election victory, his staff announced that due to protocols advised by their security team, which was also the practice of the Presidential Security  Group, journalists should be kept some distance from Duterte.

But when he arrived at the press conference, journalists, especially  the photographers, did what they usually did—some sat close to him.

Duterte even made faces and stuck his tongue out at a group of journalists  seated to his left.

“Basta madali lang naman ako aliwin,” Duterte said on Saturday night, as he  encouraged journalists not to be intimidated by him.