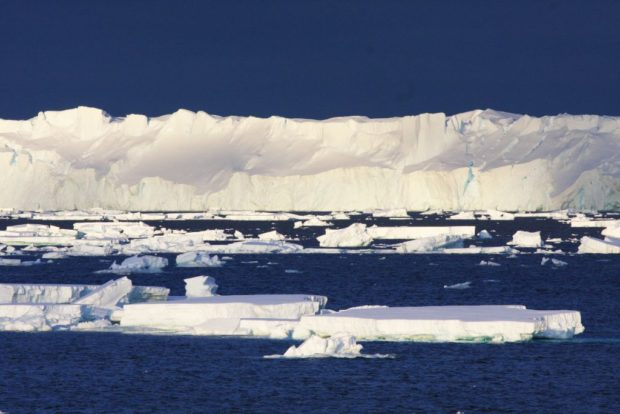 The Totten Glacier. PHOTO BY ESMEE VAN WIJIK OF ANTARCTICA.GOV.AU

PARIS—A rapidly melting glacier atop East Antarctica is on track to lift oceans at least two meters, and could soon pass a “tipping point” of no return, researchers said Wednesday.

To date, scientists have mostly worried about the Greenland and West Antarctic ice sheets as dangerous drivers of sea level rise.

But the new study, following up on earlier work by the same team, has identified a third major threat to hundreds of millions of people living in coastal areas around the world.

READ: Study blames humans for most of melting glaciers

“I predict that before the end of the century the great global cities of our planet near the sea will have two- or three-meter (6.5 – 10 feet) high sea defenses all around them,” said Martin Siegert, co-director of the Grantham Institute and Department of Earth Science and Engineering at Imperial College London, and the study’s senior author.

From the air, the contours of Totten Glacier — roughly the size of France — are invisible because the entire Antarctic continent is covered by a seamless, kilometers-thick blanket of snow and ice.

Geologically, however, it is a distinct — and volatile — beast.

Last year, Siegert and colleagues revealed that the underbelly of the glacier — most of which sits below sea level — is being eroded by warm, salty sea water flowing hundreds of kilometers inland after passing through underwater “gateways”.

As it does, the portion of the glacier resting on water rather than rock increases, accelerating the pace of disintegration.

The new study, published in Nature, used satellite data to map the hidden geological contours of the region.

The researchers found evidence that Totten similarly melted during an earlier period of natural global warming a few million years ago — a possible dress rehearsal for what is happening today.

“During the Pliocene epoch, temperatures were two degrees Celsius (3.6 degrees Fahrenheit) higher than they are right now, and CO2 levels in the atmosphere were 400 ppm,” or parts per million, Siegert said.

Sea levels during the Pliocene peaked at levels more than 20 meters (65 feet) higher than today.

“We are at 400 ppm right now, and if we do nothing about climate change we’re going to get 2C more warming too,” he added.

Indeed, even when pledges by 195 nations to cut greenhouse gases — submitted ahead of the landmark Paris Agreement last December — are taken into account, temperatures are still set to increase an additional two degrees, The United Nations has said.

Other scientists not involved in the research said its findings should be a wakeup call.

“Totten Glacier is a slumbering giant,” said Andy Shepherd, Director of the NERC Centre for Polar Observation and Modelling at the University of Leeds in England.

The “strong evidence” that the glacier has been unstable in the past, coupled with signs that it is melting now, are “a clear warning that changes might be on the horizon,” he said.

Up to now, estimates of how much Antarctica will contribute to global sea level rise before 2100 have been conservative.

The latest report from the UN’s climate science panel put that number at about a dozen centimeters (five inches), all of it from a relatively small section of the West Antarctic Ice Sheet, which is itself 10 times smaller than East Antarctica.

The Intergovernmental Panel on Climate Change (IPCC) predicted that total sea level rise from all sources — expansion of warming water, glaciers, Greenland — would probably not top a meter.

But the low figure for Antarctica has more to do with gaps in knowledge than differences of opinion.

As recently as 2000, the IPCC forecast that East Antarctica would gain mass, a scenario that few scientists believe today.

Siegert’s greatest concern is that Totten Glaciers, and other massive ice bodies, “could cross a critical threshold within the next century, entering an irreversible period of very rapid retreat.”

The problem is that science is unable to say when that might happen — or if it has happened already.

“These are issues that we have to resolve in our society today,” he said by phone. “They are pressing right now.”