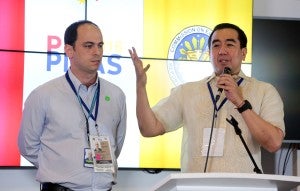 In this file photo, Comelec chairman Andres Bautista and Smartmatic General Manager Elie Moreno answers questions from reporters during a press briefing at the COMELEC headquarters in PICC on Thursday, May 12, 2016.  GRIG C. MONTEGRANDE

MANILA — The joint congressional hearing on the alteration of the script in the Commission on Elections’ transparency server has been cancelled because Smartmatic officials will be unable to show up on Thursday, according to Sen. Aquilino Pimentel III.

“Smartmatic gave a last minute notice that they cannot attend, hence the hearing would be useless if we continue tomorrow (Thursday),” Pimentel said in a text message on Wednesday.

The hearing on Thursday was supposed to tackle the tweaking of the script in the transparency server, which the camp of Sen. Ferdinand Marcos Jr. had complained about.

Marcos is running second to Camarines Sur Rep. Leni Robredo in the vice-presidential race, based on the partial, unofficial count of the Parish Pastoral Council for Responsible Voting.

The Commission on Elections had said that the alteration of the script by a Smartmatic technician only resulted in a “cosmetic” change— the correction of the spelling of a candidate’s name.

The other issues supposed to be discussed were the malfunctioning of 2,363 vote counting machines, the problems in the transmission of results from the machines, the accommodation of Smartmatic personnel in Novotel in the Araneta commercial district in Cubao near the Liberal Party headquarters, and other issues affecting the elections. SFM