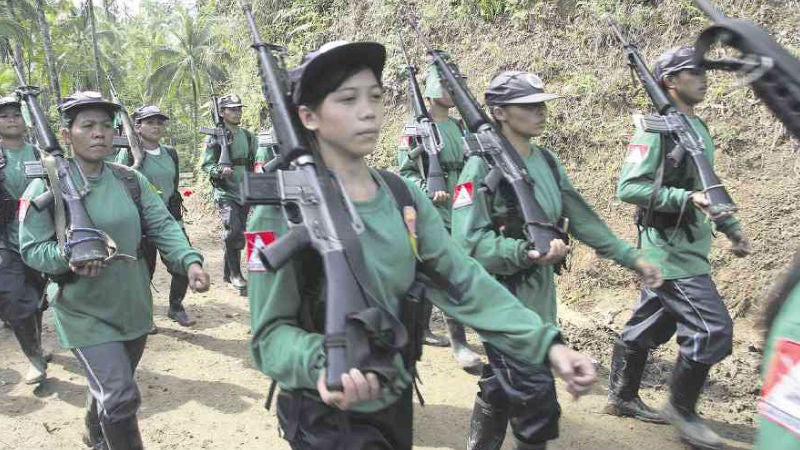 MARCHING INTO GOVERNMENT? Armed guerrillas from the communist New People’s Army mark the rebel group’s founding anniversary in this file photo taken in 2009. Presumptive President-elect Rodrigo Duterte has said that he will offer Cabinet positions to some leaders of the communist group. DENNIS JAY SANTOS/INQUIRER MINDANAO

DAVAO CITY—Presumptive President-elect Rodrigo Duterte is considering granting a general amnesty to all political prisoners as a first step toward ending a communist insurgency that has torn the nation apart for over half a century.

Bayan Muna Rep. Carlos Zarate said Duterte revealed his plan during a meeting with an emissary of the National Democratic Front of the Philippines (NDFP) and members of the Makabayan bloc in the House of Representatives late Monday in a bid to restart stalled peace talks under the Aquino administration.

In his first news conference following the May 9 elections, Duterte said, “If I am satisfied that we are dealing in good faith, I will consider releasing all political prisoners.”

Human rights group Karapatan said it had documented at least 543 political  prisoners—18 of whom were NDFP  consultants. Of the number, 88 are suffering from various illnesses while 48 are elderly.

The most prominent prisoners are Communist Party of the Philippines (CPP) chair Benito Tiamzon and wife Wilma who were arrested in March last year.

Zarate said that Duterte had thought of releasing all the political  prisoners in one big wave rather than doing it in batches.

The NDFP emissary, who requested anonymity, said that the meeting with  Duterte on Monday bolstered confidence in his incoming administration and raised not only the possibility of a ceasefire but also a chance to hammer out a final peace agreement.

Asked how the communist movement would respond if the Duterte administration declared a ceasefire, the NDFP official said that the communist-led New People’s Army would reciprocate.

He said one of the possibilities would be for communist  guerrillas, while keeping their arms, would temporarily cease all military operations.

The NDFP official said that another option was for both parties to reposition  all their forces to avoid hostilities during the ceasefire and the  negotiations.

“But vital in this is the creation of a ceasefire monitoring committee to  ensure that the ceasefire agreement is being observed,” he  said.

In the Hague Joint Declaration in 1992, both parties agreed to tackle  substantive agenda including human rights and international humanitarian  law, socioeconomic reforms, political and constitutional reforms, end of  hostilities and disposition of forces.

In March 1998, both parties signed the Comprehensive Agreement on Respect  for Human Rights and International Humanitarian Law.

The government and the NDFP panels have already formulated their drafts for  the Comprehensive Agreement on Socioeconomic Reforms but the  process has not made any progress after the talks hit a snag.

The NDFP official said his side was prepared to meet with Duterte’s team  to start talking about the reform program.

However, the NDFP official said that it would be important for the  resumption of the talks if both Duterte and NDFP chief political consultant  Jose Maria Sison, 77, founding CPP chair who has been living in exile in The Netherlands for three decades, would meet first.

“The meeting between them is not a precondition but it would help hasten  the process of the talks,” he said.

The communist insurgency has claimed more than 30,000 lives since the 1960s. President Aquino revived the on-again-off-again peace talks soon after taking office in 2010. Talks collapsed three years later after the government accused the communist negotiators of insincerity.