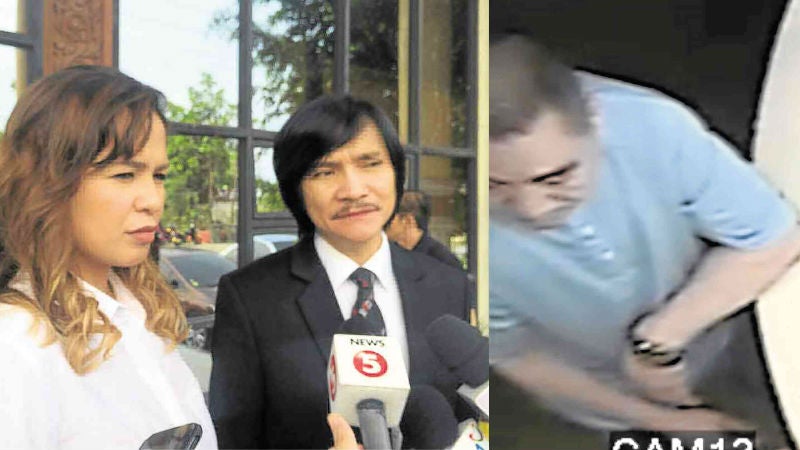 SUING ‘JOHN DOE’ Ana Capri and her lawyer Rudolf Philip Jurado file a complaint on Tuesday against a still-unidentified man whose image (right photo) was captured by a security camera at a Taguig City bar where he allegedly harassed the actress.
Maricar B. Brizuela

A month after she was allegedly groped and assaulted by a fellow guest at a bar in Taguig City, actress Ana Capri filed a complaint for acts of lasciviousness, physical injuries and slander on Tuesday, even though the male suspect remained unidentified.

Capri (Ynfane Avanica off-screen) pressed charges also against a security officer of the bar for obstruction of justice, saying the latter allowed her harasser to quickly leave the establishment after the incident and thus prevented her from taking him to the police or even get his name.

In a complaint filed in the Taguig city prosecutor’s office, Capri said she was at the Palace Pool Club in Bonifacio Global City when a “Chinese-looking” man in his 50s approached her around 3:40 a.m. on April 3. She was then charging her mobile phone at the towel area.

A copy of the video attached to the complaint showed Capri checking her phone when the man approached her from behind. The actress was seen shoving his hand away from her back.

Capri then slapped him on the face but the man hit her back on the cheek and pointed a finger at her face. “I was threatened. I was ashamed and I stood there teary-eyed while he kept pointing at my face,” she said.

The actress said she still had to get the man’s name because the club refused to give it. “We are dismayed…but we hope that people who know him could help us,” Capri told reporters at the Taguig City Hall of Justice.

In the separate complaint filed against Carl Velasco, a security officer at the club, the actress recalled that her harasser was initially stopped by other security men from leaving, but “I heard (Velasco) ordering the bouncers to let go of John Doe.”

The suspect was eventually escorted to the VIP parking area and allowed to leave in a vehicle.

Velasco, she said, later explained to her that the unidentified man was a guest of Kenneth Dong, a “club VIP,” and that “they needed to protect the respondent John Doe as it is in their VIP’s best interest.”

Dong later approached her and asked for an apology on what his guest did, she said.

Capri, who was assisted by lawyer Rudolf Philip Jurado in filing the complaints, said she wanted the club to cooperate in the investigation, noting that she was not suing its managers. “I just want them to give us the name of the person.”

The incident, she said, left her so traumatized that she had to see a psychiatrist for two weeks. “I was even afraid to go out because I didn’t know who (the suspect) was.”