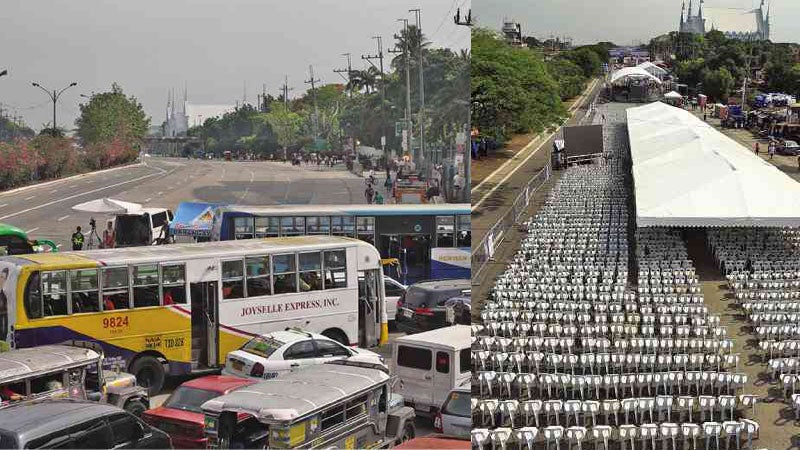 QC BOTTLENECK Traffic is diverted on Tuesday on Commonwealth Avenue, at the Sandiganbayan area, to make room for an outreach project of the Iglesia ni Cristo, whose local church at Capitol can be seen jutting out of the horizon (right photo). EDWIN BACASMAS

Thousands of motorists and commuters endured standstill traffic on Tuesday on Commonwealth Avenue in Quezon City, where a section of the highway was used for a medical and evangelical mission of the influential Iglesia Ni Cristo (INC).

Some of them later ranted online about their “hellish” experience inching their way through the Fairview-bound side of Commonwealth, where authorities closed off a portion from the Sandiganbayan building to Litex starting midnight of May 17.

“Pls. do your medical mission at Phil Arena & not broadcast your ‘good works’ on Commonwealth,” read one Twitter post from user @miladee, referring to the INC-built megastructure in Bocaue, Bulacan province.

“Ciudad Victoria (the complex where the Arena stands) is so vast, so why Commonwealth Avenue?” read another post by @jelitoalfarojr.

In a statement, INC spokeperson Edwil Zabala said: “We thank the continuous understanding of our countrymen who were delayed in their journey due to the heavy traffic on Commonwealth Avenue.”

The outreach project dubbed “Lingap sa Mamamayan” and “Pamamahayag ng mga Salita ng Diyos” was the fourth to be held by the INC in the past seven days, Zabala said, adding that 252 medical volunteers took part in Tuesday’s activity, which was scheduled from 11 a.m. to 6 p.m.

The INC also handed out 10,000 pairs of shoes, 10,000 pieces of clothing and 60,000 goodwill bags with rice and canned goods to beneficiaries, the church official added.

Members of religious group are known to practice bloc voting and its endorsement is sought by many politicians during election season.

Based on estimates made by the Quezon City Police District, the May 17 activity drew a crowd of around 80,000.

The road closure was approved and enforced by the Quezon City Department of Public Order and Safety (DPOS).

The activity also marked the “symbolic” completion of the INC Locale of Capitol—the centerpoint of the project—and was coordinated with the city government, according to DPOS chief Elmo San Diego.

The INC deployed its own traffic marshals to augment those from the DPOS and the Metropolitan Manila Development Authority (MMDA), he added.

Based on the Inquirer’s monitoring, it took more than an hour for vehicles to reach Litex from the Sandiganbayan area, as traffic flow was diverted after tents and monobloc chairs were set up on the closed-off section of Commonwealth.

According to MMDA Traffic Discipline Office head Cris Saruca, an advisory about the INC event was issued through social media a day before the project.

Motorists going to Fairview were advised to turn right to Sandiganbayan all the way to Litex. All public utility vehicles going east were given two “zipper” or counterflow lanes on Commonwealth’s westbound side so they could load and unload passengers.

The MMDA official, who went to the area to monitor the deployment of more than 100 traffic marshals, noted that traffic congestion peaked around 10 a.m., with the tail end of the queue reaching Ever Gotesco mall.

U-Turn slots were opened for motorists who wanted to find other routes, like Regalado Avenue, Sauyo Road, Visayas Avenue and Mindanao Avenue, he added.