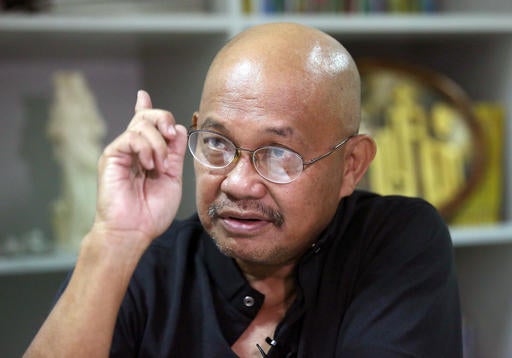 In this May 13, 2016 photo, Filipino Catholic priest Father Amado Picardal gestures during an interview at the Catholic Bishops’ Conference of the Philippines office in Manila, Philippines. Nine years ago Picardal helped bury a teenager from a slum family who was gunned down by motorcycle-riding assassins in the southern Philippine city of Davao. (AP Photo/Aaron Favila)

MANILA, Philippines — Nine years ago Father Amado Picardal helped bury a teenager from a slum family who was gunned down by motorcycle-riding assassins in the southern Philippine city of Davao. The death was among hundreds in the large port city blamed on an anti-crime purge some believed was secretly run by its mayor, Rodrigo Duterte.

Memories of that violence flashed back in the Roman Catholic priest’s mind when the tough-talking mayor triumphed in last week’s presidential election on a pledge to replicate his Davao crime-busting style in the rest of the Philippines.

“I felt sad and depressed,” Picardal said of Duterte’s rise.

A Duterte presidency is “very frightening,” he said in an interview, adding that human rights groups will need to keep a close watch and document any violations, especially extrajudicial killings, in the next six years under Duterte’s presidency.

From his 22 years as mayor to the presidential campaign trail, Duterte has never minced words about his deadly objective for criminals. But he has generally denied the existence of death squads in his city.

However, investigations by the Commission on Human Rights in the Philippines, a senior U.N. official, Human Rights Watch, Amnesty International and a group led by Picardal that opposed summary executions have concluded otherwise.

Clarita Alia, a vegetable vendor and the mother of the young man that Picardal helped bury in Davao in 2007, said she is willing to testify if a case against Duterte goes to court. Three other sons of hers who were suspected of crimes she said they did not commit were also killed by motorcycle-riding hitmen. 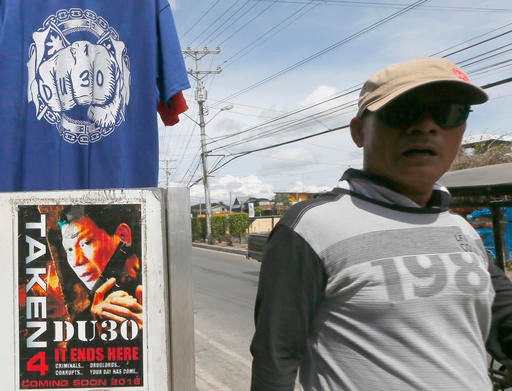 In this Wednesday, May 11, 2016 photo, a resident walks past a campaign poster of presumptive President-elect Rodrigo Duterte heralding his anti-criminality and anti-drugs platform is displayed along with souvenir T-shirts along a street at his hometown in Davao city, southern Philippines. AP

Duterte’s bold campaign pledge to end crime and corruption within six months, his iron-fisted approach to law and order, and his public threat to kill all criminals helped catapult the longtime mayor into the presidency. But his tough anti-crime reputation may now haunt him as he comes under a national and international spotlight and tries to achieve his promise.

A former prosecutor who experienced the legal complexities of battling criminals, Duterte was first elected mayor in 1988. Nicknamed “Duterte Harry” after the Clint Eastwood character with little regard for rules, he served as hundreds of suspected criminals, drug dealers and addicts were gunned down or fatally stabbed in a wave of brazen attacks by motorcycle-riding gunmen dubbed by the media as the “Davao Death Squads,” or the DDS.

On the final day of campaigning 10 days ago, he made clear he would continue to employ his hard-line approach to crime as president.

“All of you who are into drugs, you sons of bitches, I will really kill you,” Duterte told a huge crowd in Manila. “I have no patience, I have no middle ground, either you kill me or I will kill you idiots.”

But he has denied any role in gangland-style killings, at one point blaming warring gangs for the violence.

Investigators say they have found no hard evidence of a direct role by Duterte in the vigilante-style killings, saying not one witness has come forward to testify against him, possibly for fear of reprisals.

In a report, the Commission on Human Rights said 206 people, mostly suspected criminals and including 19 minors, were slain in shootings and stabbings attributed to the death squads from 2005 to 2009 alone, adding that there were witnesses to at least 94 of the killings.

“Nobody wanted to testify,” said Loretta Ann Rosales, who headed the commission at the time. “There was a measure of fear. We can’t prove his criminal liability because nobody would say that he ordered the killings.”

Phelim Kine of the U.S.-based group Human Rights Watch said it found no hard evidence of any direct role by Duterte in 28 death-squad killings, mostly from 2007 to 2008, that it investigated.

“What is unquestionable is that we found evidence that Davao city officials and police were directly involved and that evidence merits a thorough investigation by the Philippine authorities,” Kine said, adding that his group wasn’t aware if the government had acted on the findings. In this Wednesday, May 11, 2016 photo, residents walk past giant tarpaulins of presumptive President-elect Rodrigo Duterte at his hometown in Davao city, southern Philippines. AP

In its 2009 report, Human Rights Watch said many of the killers were former Marxist rebel hitmen or targeted criminals who turned into DDS gunmen to avoid death. It said they were armed with .45 caliber pistols and paid to carry out the executions by their “boss.”

The boss “provides members of a death squad team with as little as the name of the target, and sometimes an address and a photograph. Police stations are then notified to ensure that police officers are slow to respond, enabling the death squad members to escape,” the human rights group said.

“The motive appears to be simple expedience: courts are viewed as slow or inept. The murder of criminal suspects is seen as easier and faster than proper law enforcement,” it said.

Philip Alston, then the U.N. special rapporteur on extrajudicial, summary or arbitrary executions who looked into the Davao violence, said in a 2008 report that it would be a “polite euphemism” to describe the killers as “vigilantes” given the “shocking predictability” with which they killed their victims, adding many of them didn’t even wear masks.

“One fact points very strongly to the officially sanctioned character of these killings: No one involved covers his face. The men who warn mothers that their children will be the next to die unless they make themselves scarce turn up on doorsteps undisguised,” Alston said.

Rosales said the Philippine human rights commission asked the Ombudsman, which prosecutes officials for wrongdoing, to investigate Duterte in 2012 for possible administrative liability “for his inaction in the face of evidence of numerous killings committed in Davao City and his toleration of the commission of those offenses.”

Her commission cited the country’s constitution, local laws and international conventions that bind the Philippine government and its officials to protect human rights and effectively investigate and prosecute violators.

That attempt failed, however, when Duterte was let off by a Philippine legal doctrine that absolves newly elected officials from administrative liabilities they may have committed in past terms, Rosales said. Duterte was reelected mayor in 2013.

The Supreme Court struck down that doctrine last year due to complaints that it had blocked the prosecution of officials accused of wrongdoing and corruption.

Although Duterte was cleared, 21 high-ranking police officials who were not covered by the doctrine were found guilty of “simple neglect of duty” by the Ombudsman in 2012 for failing to stop death squad assaults in their areas that killed 720 people from 2005 to 2008.

Each officer was fined the equivalent of one month of salary, according to the Ombudsman’s office.

Despite his brash campaign rhetoric, Duterte will find it hard to bring his Davao crime-fighting style to the rest of the country because of the oversight of Congress, the judiciary and other agencies that check abuses. The world will be watching too, said Picardal, who was assigned to Davao for many years until he moved to Manila in 2011.

“There are checks and balances,” he said. “The eyes of the nation and the world are on him.”

The 61-year-old priest said he understands that the nearly 16 million Filipinos who voted for Duterte for president have a legitimate yearning for change because of their exasperation over crime and corruption. Some may not even be aware that the killings in Davao were real and not just Duterte’s bluster, he said.

But for those who were aware and glossed over the deadly violence that blighted Davao, Picardal said he hopes they will examine their conscience and not yield to desperation.

“What I’m afraid of is that we’ll become a nation where a lot of people have lost a sense of right and wrong,” he said. TVJ