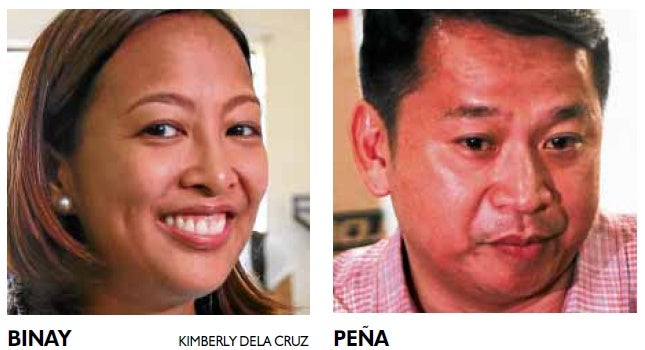 MAKATI Mayor Romulo “Kid” Peña’s poll protest to be filed in the Commission on Elections (Comelec) this week will include a petition for a manual recount, his camp told the Inquirer on Monday.

According to the mayor’s camp, they want to reexamine all the ballots cast in the May 9 local polls, particularly those coming from the second district which Peña considers his bailiwick.

His supporters earlier accused the camp of District 2 incumbent  Rep. Mar-Len Abigail “Abby” Binay—who was declared the winner in the mayoral race—of “cheating and manipulation.”

Based on the Comelec tally, Binay won by more than 26,000 votes in the second district.

According to Peña’s lawyers, they were preparing the evidence to prove their claims of tampering with the vote results and vote-buying. They added they would also present witnesses who were reportedly harassed into voting for Binay.

Sought for comment, Binay’s spokesperson Joey Salgado said that they would wait for the evidence to be presented by Peña and respond to these accordingly.

Earlier, he told the Inquirer that they had no means to cheat since Peña was the one in power. At the same time, Salgado urged the mayor to submit all his evidence to the people to determine if there was really cheating in the local polls.

Peña’s camp estimated that he may end up spending around P10 million for his electoral protest. The expense, however, would be worth it especially if it should prove that around 36,000 votes for Peña were tallied in Binay’s favor, they added.