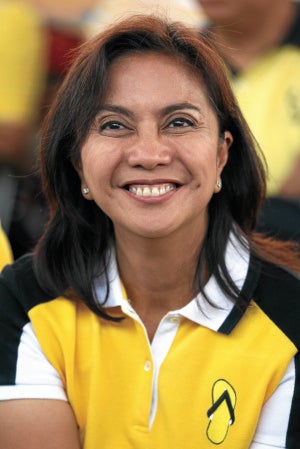 MANILA — Liberal Party (LP) vice presidential candidate Leni Robredo on Sunday claimed victory in the electoral race, saying it has become mathematically impossible for her closest rival Sen. Ferdinand Marcos Jr. to catch up with her.

“It’s irreversible. We have won,” the Camarines Sur congresswoman told a big crowd of supporters on a makeshift stage at the Ateneo de Manila University.

Robredo spent more than 20 minutes expressing her thanks and thoughts on the election, speaking at length about her underdog journey. “Among all the national candidates, I was the least likely [to win],” she said.

Addressing the allegations of fraud, she said: “You know I would never allow myself to be used either as an instrument or recipient of cheating.”

The widow of former Interior Secretary Jesse Robredo also asked her supporters to show patience to detractors. “Take the high ground,” she said, adding: “There’s no need to quarrel with anyone. We have won.”

Her campaign team had also begun to refer to Robredo as “Vice President-elect.”

The head of Robredo’s policy unit, Boyet Dy, told the crowd that her lead of more than 257,000 votes, as of Sunday afternoon, was insurmountable even if all the remaining votes went to her opponent.

“Even if we gave all the votes to Marcos, based on official Comelec data, Leni is still leading,” he said.

“Of the 18 regions in the country, Congresswoman Leni won 10, Senator Marcos won 7, and the remainder went to another candidate,” he said.

Based on their latest count, including the overseas and local absentee voting, Robredo led Marcos by 257,567 votes, he said, more than the 168,988 votes from the nine remaining municipalities.

“Numbers do not lie. Because of this, we wholeheartedly say that no one can stop Leni Robredo. We have full trust that she is our next Vice President,” Dy said.

Robredo said she had not wanted to make any premature declarations of victory as she did not want to use her staff’s own numbers. She said they based all their calculations on Comelec-released numbers.

Earlier Sunday, Robredo attended mass at Ateneo’s Church of the Gesu at past 3 p.m. only a few hours after Marcos did the same at the Baclaran Church.

The 51-year-old Robredo was accompanied by her three daughters Aika, Tricia and Jillian, who each had a role in the mass officiated by her spiritual adviser Fr. Manoling Francisco.

The Jesuit priest gave a nonpolitical homily and did not mention Robredo, focusing his talk on the “language of love” that empowers Christians to spread God’s message.

Robredo is leading Marcos in partial and unofficial tallies by more than 200,000 votes but the latter’s camp has raised doubts about the integrity of the results, including the introduction of unauthorized script in the transparency server.  SFM