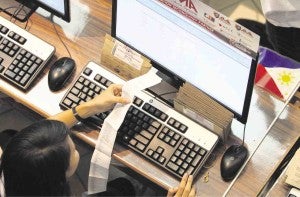 Auditing the vote count from the 2016 automated elections. INQUIRER FILE PHOTO/RICHARD A. REYES

BACOLOD CITY, Negros Occidental — The  secure  digital (SD) memory cards of the  Commission on Elections (Comelec) in Kabankalan City, Negros Occidental have all been accounted for, after three of them were found in a dumpsite on Wednesday.

Kabankalan election officer Revo Sorbito said on Sunday that three SD cards were left inside a box by election personnel while packing the SD cards for delivery to the Comelec provincial office.

The box, he added, was later picked up by garbage men along with the rest of the trash from Comelec-Kabankalan, he added.

He said three SD cards were discovered missing when they checked the box at the Comelec provincial office.

He added that he asked his personnel to check the box where all the SD cards were kept but they could no longer be found.

The Comelec-Kabankalan sought the help of scavengers to help them locate the lost SD cards and promised a reward of P500 each.

Sialsa and Regalado found the two SD cards inside the torn brown envelopes.

“One brown envelope was already damaged but there was no SD card in it,” said Sialsa.

Sorbito maintained that no anomaly took place and that all three missing SD cards had been found and submitted to the Comelec provincial office.

He pointed out that the winners in Kabankalan were proclaimed on Tuesday, a day after the polls and the voting results in the city were submitted to the central server.  SFM/rga