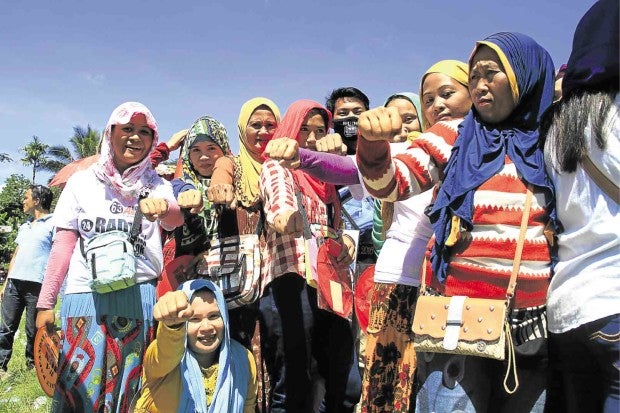 VICTORY IS OURS! Or so these Maranao women voters seem to be saying as they punch the air with closed fists, a gesture associated with presumptive President-elect Rodrigo Duterte. The women lined up for the special elections in Binidayan, Lanao del Sur, on Saturday. RICHEL V. UMEL/INQUIRER MINDANAO

The special elections held on Saturday in several barangays in the Visayas and Mindanao were generally “peaceful and orderly, ” the military said.

The Armed Forces of the Philippines Public Affairs Office (AFP-PAO) under Col. Noel Detoyato reported that as of press time,  the special elections, particularly in Mindanao, proved to be without incident.

Elections in these areas  were declared a failure on May 9 due mostly to “security concerns.”

The AFP-PAO reported that precincts in Pata Island, Sulu, “opened peacefully” as early as 7:30 a.m.; in Barangay Katuli, Sultan Kudarat, in Maguindanao at 7:10 a.m. and in Binidayan, Lanao del Sur, as early as 6:15 a.m.

The Philippine National Police deployed its forces to 52 barangays in eight provinces where the special polls were to be conducted.

On Friday, the Commission on Elections (Comelec) reported an increase in the number of precincts that suffered a failure of elections, and raised the number of voters affected by the special polls to 18,504.

Due to misdelivered or insufficient number of ballots on May 9, special polls were also held Saturday in Barangay Gabi in Cordova, Cebu; Barangay Alobo in Sta. Cruz, Marinduque; Barangay Malalag in Maitum, Sarangani; Barangay Mabuyong in Anini-y, Antique, and Barangay Insubuan in San Remigio, also in Antique. TVJ

‘No proclamation until after special polls’