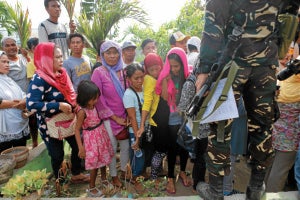 A soldier stands beside voters waiting for their turn to cast votes in Maguindanao.PHOTO BY JEOFFREY MAITEM / INQUIRER MINDANAO

MANILA — The Commission on Elections (Comelec) declared on Thursday, failure of elections in more areas in Visayas and Mindanao.

In a resolution, the Comelec en banc said that 703 registered voters from Barangay Katuli, Sultan Kudarat in Maguindanao were not able to vote because the ballot box, including other election paraphernalia, were forcibly taken by unidentified men. These caused members of the Board of Elections Inspectors (BEIs) to leave the polling precinct for safety and have not been found since.

More than 700 voters from Barangay Binucayan, Loreto, Agusan del Sur were also not able to vote due to lack of official ballots.

The poll body also said that no election was held in Barangay Palayog, Hinigaran, Negros Occidental, affecting 685 voters, due to mis-delivered ballots.

The Comelec en banc has announced that special elections will be held in the identified areas on Saturday, May 14.  SFM