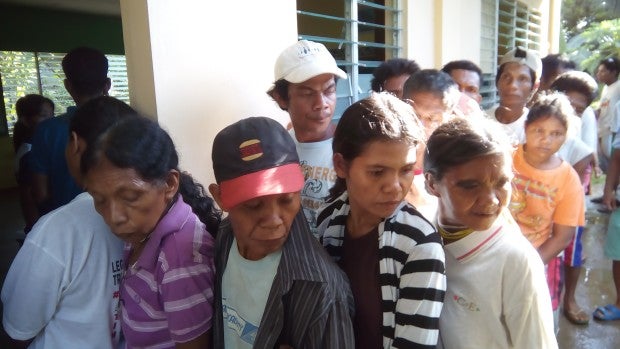 MANGYANS are given the chance to vote in special polling precincts, separate from Tagalog voters or lowlanders. MADONNA T. VIROLA/INQUIRER SOUTHERN LUZON

BACO, Oriental Mindoro—On Election Day,  Cristina Gonzago, a 56-year-old Mangyan Alangan, lined up in a precinct at  Casillon Elementary School where the Mangyan used to vote with the Tagalog (lowlanders). The experience used to be an uncomfortable encounter with discrimination, she recalled.

“We would separate ourselves from the Tagalog,” Gonzago said. “We are a shy people and we have observed that the non-Mangyan would be prioritized in voting.  By the time we reach the start of the line, the precincts would be closing, and we would be unable to vote,” she said, smiling at the memory.

It was a different story this time, said Manuel Mintaras, a Mangyan leader in the subvillage of Bagong Pag-Asa in Barangay San Ignacio here.  More Mangyan felt encouraged to vote this year because the Commission on Elections (Comelec) had provided them with separate polling places.

“So we avoid walking long distances to reach the precinct, where we experienced being [detained by some candidates], discriminated upon, and treated as second class citizens,” said Dindo Dumagol, a Mangyan volunteer for the election watchdog, Legal Network for Truthful Elections (Lente).

Eight AVCs and 21 SPPs were set up in the Mindoro provinces in last week’s elections. Records showed that the island has 2,883 IP voters spread over 14 villages in Oriental Mindoro and seven villages in Occidental Mindoro.

The Philippines has 181,767 registered IP voters, according to Comelec.

The project was a success, said Noel Merano, Lente’s project coordinator in Oriental Mindoro. “Overall, the project turned out to be efficient and effective [in encouraging wider participation from the group],” he added.

There were still complaints of various forms of vote-buying and hamletting, but these were fewer than in past elections, Merano said.

Lawyer Nona Ann Caritos, Lente executive director, said providing the Mangyan separate polling places was a product of years of consultations with the indigenous group and other indigenous people.

“We recognize [the Mangyan’s] right to self-determination,” said Comelec Commissioner Luie Tito Guia, who was in charge of the project during its provincial launch in the capital city of Calapan last month.

The Comelec passed Resolution No. 10080 to also address issues of intimidation and the “hakot” system, where candidates would virtually hold captive members of indigenous peoples’ groups, like the Mangyan, a few days before elections.

In the 2004 elections, the Inquirer witnessed how candidates herded tribal folk in Paluan town in Occidental Mindoro to a “pala-pala,” a shed roofed with coconut leaves and fenced with wires. Sometimes the groups were held inside the local gymnasium, a cockpit arena or the homes of candidates or their supporters.  They were fed and kept there until Election Day, when they were finally set free and expected to vote for the candidate who took them in forcibly.

The practice had earned the tribal folk the moniker “hakot” (paid voters).

Fr. Anthony Tria, SVD, who was assigned to the Mangyan Mission, stood by tribe members who wanted to stop the practice.

“I hope the pilot project works,” said Florentino Gayadan, a sitio leader in Paluan town, who said he did not want to be treated like a pig being fattened for the kill.

“I realized that (lowlanders) looked down on me,” he added.

Indeed, in previous elections, the Mangyan reported cases of discrimination, harassment and threats from supporters of local candidates.

The pilot project solicited the Mangyan’s participation through sworn statements. Those who did not consent to the SPP were instead provided express lanes for IP voters in polling precincts, a privilege also extended to persons with disabilities, pregnant women and the elderly,  said Nestor Salvacion, an election officer of Pinamalayan town in Oriental Mindoro.

The project was first launched in Metro Manila in March.

“We want to create awareness in Mindoro to avoid negative reactions that comes from not understanding the project,” said lawyer April Rose Mabanes of the Comelec’s IP committee.

Voting started at 6 a.m. and ended at 3 p.m. at the SPPs, and was held from 6 a.m. to 2 p.m. at the AVCs, to give time for the transport of ballots for counting from the AVC to regular polling precincts at San Ignacio Memorial School here, about a kilometer away.

The ballots from non-Mangyan voters and IP voters were later mixed to make the results of the IP vote confidential, said Dumagol.

Around 60 Mangyan voted in the AVC, while 159 others used the SPP.

Apart from the regular watchers assigned by the candidates, the personnel of the Commission on Human Rights  and the National Commission on Indigenous Peoples (NCIP) also observed the proceedings.

“The project’s success will be taken to other parts of the country, with the lessons [learned] from this pilot,” Guia said, adding that elections are more about voters than candidates.

The exercise, he said, serves as equalizer, where both the rich and the poor have a vote each to choose their leaders.

Mangyan Dutch is a culture bearer