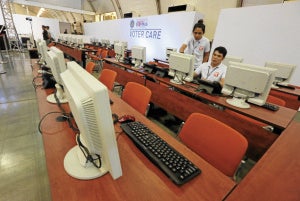 GETTING READY:  IT personnel checks the computer monitor at the voter care section of the Commission on Elections headquarters atbthe PICC on Tuesday, May 3, 2016.  INQUIRER PHOTO / GRIG C. MONTEGRANDE

MANILA — The Commission on Elections retrieved a copy of the altered script from the transparency server with the Parish Pastoral Council for Responsible Voting with the intention of making it public on Friday (May 13) to show that the changes it caused were only cosmetic and did not affect the vote results.

Comelec spokesperson James Jimenez said the script had been altered by a Smartmatic technician in order to correct the question marks appearing in the display of candidates names. The question marks were supposed to show up as the character “ñ,” and the changes in the script were made so that this would be the case.

The alteration of the script changed the hash codes, which serve as digital fingerprints.

The data were saved in a thumb drive that was sealed in an envelope and would be opened tomorrow. The retrieval of the data was witnessed by the media and representatives of political parties.

The demonstration scheduled by the Comelec for Friday, will show the altered or corrected script, how it works, and its generation of the hash code.

The Comelec will also show what would happen if the script is reverted to its original state. It is expected to show that the  “ñ” characters would change back to question marks.

This way, said Jimenez, the Comelec could show that the effect of changing the script was only to correct the encoding of the text so that the question mark would be displayed correctly as an “ñ.”

“You’ll see that that’s the only effect that it had,” he said.

The PPCRV is leaving it up to the Comelec to respond to allegations that a new script was introduced in the transparency server receiving the votes to change the hash code.

The allegations surfaced as the camp of Sen. Ferdinand Marcos Jr. questioned the result of the polls that showed him in second place to administration candidate Leni Robredo in the vice presidential race.

According to Ana de Villa Singson, PPCRV media and communications director, the Comelec owns the transparency server on the PPCRV premises,and that the Comelec and Smartmatic handle the software.

“All the scripts, hash code, server and program, it’s Comelec. We don’t meddle with that because we are just the receiver of the data like the other organizations,” she told reporters on Thursday.

The PPCRV, she said, was not in a position to alter the system.

“It’s not our program. We cannot introduce any changes to that system,” she said.

She also pointed out that the Comelec server room was highly secured and anybody entering it would need two passes.

Asked if the Comelec informed the PPCRV of any changes it made to the script or hash code, she said she would rather let the poll body speak on that so as not to cause any confusion.

On Wednesday night, Arwin Serrano of the PPCRV’s Accountable Materials Verifiable Audit Trail also disputed insinuations that the results of the polls were altered.

But Serrano also told reporters that there had been a correction made in the script for a spelling error.

A letter in one name was changed to an “ñ,” Serrano said. But he said this did not mean that a command was changed.  SFM