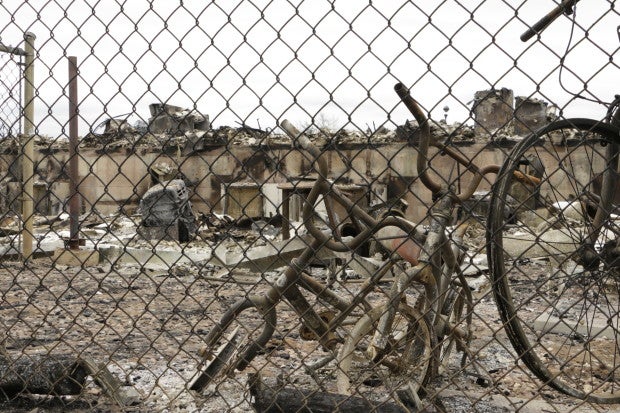 Bicycles lean against a fence in front of burned townhouses in Fort McMurray, Alberta, following a massive wildfire, Monday, May 9, 2016. A break in the weather has officials optimistic they have reached a turning point on getting a handle on the massive wildfire. AP

All told, crews were battling 20 fires in Alberta province, although Fort McMurray’s was the only one still out of control, as it spread east. Half the province’s 1,500 firefighters are assigned to fight it.

The blaze has now charred more than 2,290 square kilometers (884 square miles) of land and destroyed some 2,400 homes and other buildings.

The entire city of 100,000 people was evacuated last week. Its suburbs suffered major damage, but not the city center.

Still, the toll is expected to be staggering.

“We know already the damage resulting from the wildfires will be in the billions and take years to recover,” said Conrad Sauve, head of the Canadian Red Cross.

Of 67 million Canadian dollars ($52 million) raised by the Red Cross over the past week, $50 million will be handed over immediately to people evacuated because of the fire, Sauve told a news conference.

The Red Cross will hand out 600 Canadian dollars per adult and 300 dollars for each of their dependents.

The federal and provincial governments have pledged to match every dollar raised by the Red Cross.

The risk of fire in western Canada remains high because of dry and unseasonably hot weather in recent weeks.