When Zika hits, a push for birth control and abortion? 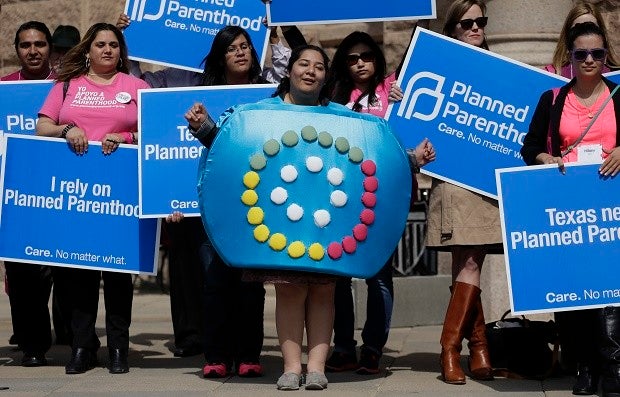 In this March 7, 2013 file photo, Alyssa Travino, center, of Edinburg, Texas, wears a birth control bill box costume during a Planned Parenthood rally on the steps of the Texas Capitol, in Austin, Texas. In 2013, the Texas legislature cut Planned Parenthood from the program that funds birth control and other family planning services for low-income women. In a medical journal article published this year, researchers looked at the effect of that change. They reported significant declines in women using long-acting forms of birth control, and a significant increase in births to low-income women. AP FILE PHOTO

Fearful they might bear children who suffer from brain-damaging birth defects caused by Zika, more women are expected to look for ways to prevent or end pregnancies. But the highest risk of Zika spreading is in Southern states where long-lasting birth control and abortions are harder to procure, and where a mosquito that transmits the virus already is plentiful.

“I think it’s really important, facing this potential for Zika transmission in the US, to be thoughtful and prepared to have straightforward conversations about reproductive health services,” said Dr. Christine Curry, a University of Miami obstetrician who has been treating women concerned about Zika infection.

The issues already have been raised in Latin America, epicenter of the Zika epidemic and home to numerous countries where abortion is illegal.

Zika is mainly spread by Aedes aegypti mosquitoes, but that kind of transmission has not yet been seen in the US mainland. Most of the 472 reported infections in the 50 states have been seen in people who traveled to — and were infected in — Zika outbreak countries. Mosquitoes have already been spreading the virus in Puerto Rico and two other subtropical US territories.

Experts think that will happen elsewhere in the US in the months ahead, when hot weather hits and mosquito populations boom.

They don’t expect Zika to sweep the US mainland the way it spread through some Latin American and Caribbean countries. A colder climate limits the range of Aedes aegypti, and the greater use of air conditioning and window screens will probably lessen its impact even in the Southern states where transmission is most likely.

READ: Pregnant Connecticut teen shocked to learn she has Zika

The betting money is on clusters of cases limited to a few states — most likely Florida, Texas or Hawaii.

And it’s not yet clear what percentage of cases of Zika infection during pregnancy will result in death or severe damage for the fetus.

“That’s one of the most important questions for us to answer” right now, said the CDC’s Dr. Anne Schuchat at a White House briefing last month.

A couple of small, early reviews of cases in other countries suggest that somewhere between 1 and 29 percent of women infected with Zika during pregnancy might have fetuses or babies with birth defects.

If the risk is 1 percent, a pregnant woman may well want to carry through the pregnancy. As the risk gets larger, at some point more women may think about abortion, experts say.

Complicating the decision: Even in cases when women are infected early in their pregnancy, ultrasound exams of fetuses have not shown signs of Zika-related birth defects until after 20 weeks — a point at which destruction of the fetus would be considered a “late-term abortion.”

Late-term abortions are more expensive, can be riskier for the mother, and involve a more developed fetus. About 20 states prohibit abortions past a certain number of weeks, in some cases making exceptions to save the life or health of the woman. In 12 of the states, the prohibitions kick in at 20 to 22 weeks.

Serious birth defects “may not be picked up until well after the termination cut-off in a specific state. Termination may not be an option for these women,” said Dr. Jeanne Sheffield, a Johns Hopkins University obstetrician who has advised the CDC on Zika-related pregnancy issues.

The specter of any Zika-driven abortions is alarming, said the Rev. Frank Pavone, National Director of Priests for Life. “The child in the womb is a patient too, and killing one’s patient is never an appropriate response,” he said in a statement.

Though the US Supreme Court famously ruled abortion is legal in 1973, the last decade has seen state legislatures pass a wave of abortion limitations and restrictions, including when during a pregnancy abortions can be done, and what techniques can be used. The number of clinics, hospitals and doctors’ offices that perform abortions has been shrinking, with notable declines in some of the states most likely to see Zika outbreaks.

Nearly half of US pregnancies are unintended, meaning a couple failed to properly use effective kinds of contraception. In Texas, it’s more than half. And in Florida, it’s nearly 60 percent, according to Guttmacher Institute estimates from 2010.

The national figure “indicates to me there is a large unmet need for contraception in the United States, and that we need to look for ways to make contraception more available for women who want it,” said Dr. Denise Jamieson, leader of a CDC team looking at Zika and unintended pregnancy.

There has been a push in some states to keep contraception funding away from groups that might refer women to abortion clinics.

In 2013, the Texas legislature cut Planned Parenthood from the program that funds birth control and other family planning services for low-income women. In a medical journal article published this year, researchers looked at the effect of that change. They reported significant declines in women using long-acting forms of birth control, and a significant increase in births to low-income women.