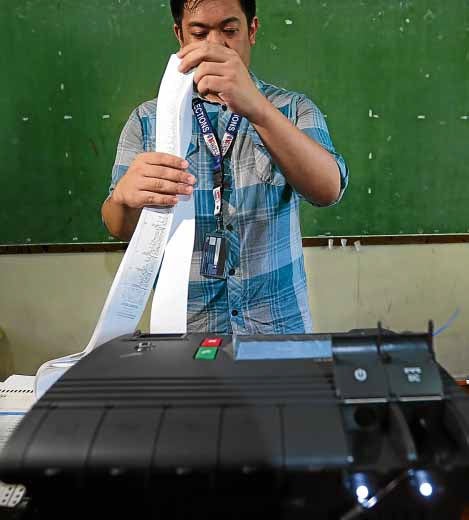 The May 9 election has set records for the largest and fastest electronic vote count of its kind in history. RAFFY LERMA

Smartmatic, which provided the technology and vote counting machines used in the just concluded national elections, said on Tuesday that in only six years, the Philippines has become a world reference point for automation and well-run elections.

In a statement, Antonio Mugica, the chief executive officer of Smartmatic, described the 2016 polls as ”a landmark with the largest ever manufacture and deployment of vote counting machines, making this a truly historic moment.”

Mugica said the global election solutions company was proud to be part of the largest electronic vote counting project in history.

“The Philippines has more than 54 million registered voters, is made up of over 7,000 islands and has one of the largest diaspora in the world. Without technology, votes would not have been processed so quickly and efficiently,” he said.

The election on Monday (May 9) set records for size as the largest electronic vote count of its kind in history and for the speed of the tally, with 80 percent vote transmission rate just four hours after the polls closed, Mugica said.

Using advanced election technology, results were registered, counted and published online in real time. The first votes were transmitted from 13 regions just one minute after the polls closed. Within two hours, 66 percent of the vote counting machines had transmitted results, compared with 17 percent in the 2010 election.

“Leveraging technology and the committed effort of the society as a whole, we conducted a record-breaking election which delivered accurate, transparent and legitimate results and contributed to a historic turnout of 81.7 percent,” said Andres Bautista, chairman of the Commission on Elections (Comelec).

In the months before the 2016 election, comprehensive audits, reviews and certifications were conducted to show that the system was fully prepared in terms of speed, reliability and security. On Monday, voters received paper copies of their ballots to validate that the system registered their votes correctly.

More than 92,500 of Smartmatic’s vote-counting machines were deployed across 36,805 polling stations for the election. In addition, overseas voting in 18 countries was conducted with Smartmatic technology to process paper ballots.

Read Next
Vice Gov. Cadiao ends Antique Gov. Javier’s political streak
EDITORS' PICK
Giant clams worth P160M seized in Palawan raid
Nestlé Philippines’ ‘NESCAFÉ Plan’ bags Grand Anvil at PRSP 56th Anvil Awards
Every Filipino home can now be a smart home with realme TechLife
So: I lacked connections to succeed in PH ‘culture’
New variants suspected in surge of Covid-19 cases
Smart reinforces superiority with best speed and mobile video experience in PH
MOST READ
How to lose a Filipino genius: Wesley So officially a US citizen
US lays out list of aid to ‘satisfy’ Duterte following VFA payment demand
So: I lacked connections to succeed in PH ‘culture’
Robredo on Sara Duterte leading poll surveys: Why are Filipinos drawn to leadership of this kind?
Don't miss out on the latest news and information.