Mixture of loss, hope for Canadian town hit by wildfire 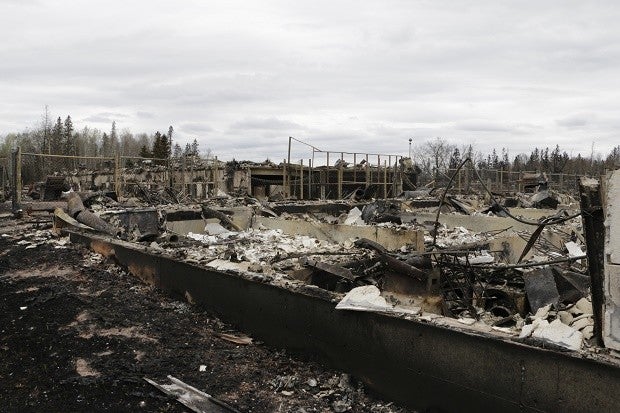 Destroyed townhouses in the Abasand neighborhood of Fort McMurray, Alberta, are viewed after a massive wildfire, Monday, May 9, 2016. A break in the weather has officials optimistic they have reached a turning point on getting a handle on the massive wildfire. AP

FORT MCMURRAY, Alberta — Charred bicycles lean on a fence in front of incinerated townhomes. Just across the street, a school and playground are untouched.

Across this Canadian oil sand town, the contrast is repeated: neighborhoods that burned to their foundations, while other neighborhoods, strip malls, car dealerships, schools and hospitals are still standing.

Nearly a week after people started evacuating Fort McMurray as a massive wildfire surrounded them, more than 40 journalists were allowed into the city Monday on a bus escorted by police, as the forest surrounding the road into town still smoldered.

READ: Filipinos in fire-stricken Canadian province may have to go home

The first neighborhood seen, Beacon Hill, was an example of the worst a fire can do.

At one lot, a barbecue sat in the driveway, a few feet away from a charred pickup truck, its wheels melted into the ground, the debris surrounding them the scattered components of what was once a house.

Lot by lot the scene was repeated: homes burned to their foundation and reduced to rubble.

A short drive away, nearly an entire trailer park community burned to the ground, the exception a single line of homes in the last row.

Fort McMurray Fire Chief Darby Allen said that he knew residents were likely watching media reports to find out the status of their neighborhoods. He briefly choked up while saying he wanted them to know that emergency responders “gave their all.”

Even with all of the personal loss, nearly 90 percent of the city is still standing, including the downtown district. Allen said that the fire got as close as the corner of a bank, but firefighters were able to fight back the flames. If that had not been successful, he said, downtown would have been lost.

Alberta Premier Rachel Notley said Tuesday that the massive oil sands mines north of Fort McMurray have not been damaged. She said most of the oil sands industry has stopped production and will only start back up when it is “absolutely safe” but that should happen soon.

She met Tuesday in Edmonton, Alberta, with oil sands industry officials to discuss the impact of the wildfire.

After touring Fort McMurray on Monday, Notley said about 2,400 homes and buildings were destroyed in the city, but firefighters managed to save 25,000 others, including the hospital, municipal buildings and every functioning school.

Fort McMurray “is a home you are going to return to,” she promised residents at a news conference Monday.

Those 80,000 residents are scattered throughout the province, some staying at evacuation centers, others with family and friends.

Randy MacKenzie was filling up his gas tank at Wandering River Monday night, heading south to Redwater, Alberta, with eight dogs in kennels in his truck and an attached trailer.

MacKenzie, who owns a boarding kennel in Fort McMurray, fled during the evacuation last week with 56 dogs that were at the kennel at the time the mandatory evacuation order came down. He had friends in a safe area keep his four dogs.

On Monday, he was allowed back in to pick up his dogs as well as other dogs that belonged to friends.

Though his boarding kennel was in an area that was saved by firefighters, his home was in Beacon Hill.

MacKenzie hasn’t been back to the neighborhood, which is still under the mandatory evacuation order, but he knows what he’ll find when officials allow residents to return.

Dave Cramm, a 38 year-old welder, said he doesn’t understand why he can’t go home because it appears that his house in the Timberlea neighborhood was untouched. Cramm worries that if people are kept out of the city for too long, especially if they know their homes are undamaged, things could get tense.

“It’s going to create hostility,” said Cramm, who on Tuesday was smoking outside a reception center in Lac La Biche, Alberta, about a three-hour drive south of Fort McMurray.

“You got people here getting stressed out.”

Bobby Leftakis, 46, lives in a trailer surrounding a lake in Fort McMurray, and said he doesn’t know how his home fared. He saw pictures of another trailer park that had been leveled except for a row that was spared the flames, and knows the fire could just as easily have taken his place, though he remains hopeful. He said he knows there was some fire in his development.

Leftakis and several friends who evacuated together are staying at a lodge near the evacuation center in Lac La Biche. They all watched the news reports of Monday’s tour of Fort McMurray.

“This disaster is surreal,” he said. “You can’t believe it.”

Leftakis, a scaffolder for Suncor, said he and his friends have many unanswered questions after watching the news reports from Fort McMurray.

“Do we have a house? Do our friends have their house? When are we going back?” he asked.

Leftakis recalled his daunting evacuation, saying that he drove near the badly hit Beacon Hill neighborhood as it was consumed by flames.

“I was praying ‘Am I going to make it’? You could feel the heat in the car,” he said.

When he later saw video from the neighborhood he last saw burning, he was not surprised by the result.

“We were expecting the devastation,” he said. “We thought it was going to be worse, to be