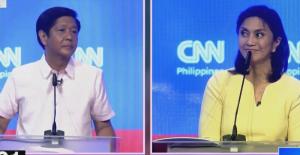 DAVAO CITY – The presidential race is over, with Rodrigo Duterte winning the quick count by a landslide.  His running mate, Allan Peter Cayetano, has given up the fight. But the fight continues for Leni Robredo and Ferdinand Marcos Jr.

Robredo’s number spiked when the Mindanao votes started to come in. She got a greater number of votes from the Autonomous Region in Muslim Mindanao (ARMM) at 408,397 compared to the 249,963 that Marcos garnered, based on the partial, unofficial 72.35 percent processed election returns.

ARMM has at least 1.8 million voters.

Both ARMM gubernatorial candidates– reelectionist Mujiv Hataman and Sulu vice governor Abdusakur Tan –belong to the pro-administration Liberal Party. They may have failed to deliver votes for the party’s standard bearer Mar Roxas as Duterte won by a wide margin in the region, but Robredo benefited from the LP machinery.

Some analysts say Marcos had a dismal showing in the ARMM because of his family name. His namesake and father was the dictator blamed for starting the war in the region in the 1970s.

It was during President Marcos’ administration that the Moro National Liberation Front was founded. It was also during this era that Muslims fell victims to human rights violations perpetrated by state security forces.

The people’s experience under Martial Law may have also boosted Robredo’s numbers in the Caraga Region, where she got more than 120,000 votes against the dictator’s son, and in Northern Mindanao, where she garnered 680,148 votes, compared to Marcos’ 427,116.

But in Central Mindanao, Marcos edged Robredo with at least 80,000 votes.

It is only in Southern Mindanao where Cayetano became the frontrunner–  garnering more than a million votes, more than half of Marcos’ 461,386 and Robredo’s 230,468 (94.74 percent partial, unofficial).

Southern Mindanao is considered to be Duterte’s bailiwick. Even with Marcos getting more votes in Central and Southern Mindanao, these were not enough to overtake Robredo’s numbers.  SFM