Facts and figures on the Philippines 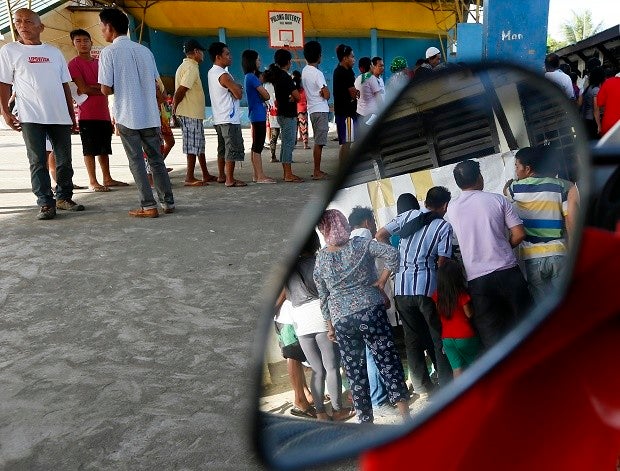 Filipinos queue up to vote for the country’s presidential elections at the front-running presidential candidate Mayor Rodrigo Duterte’s hometown of Davao city in southern Philippines Monday, May 9, 2016. Millions of voters are expected to troop to polling precincts all over the country to elect the successor of President Benigno Aquino III. AP

MANILA, Philippines — The Philippines is holding general elections Monday to elect a president and vice president and other congressional representatives nationwide. Here are some facts and figures about the country:

GEOGRAPHY: An archipelago of 7,107 islands flanked by the Pacific Ocean and the South China Sea, and often an entryway for Pacific storms blowing into Asia. The nation has a tropical climate.

PEOPLE: Population of more than 100 million, mostly descendants of settlers from Southeast Asia and Indonesia, with a large Chinese minority.

RELIGION: About 80 percent are Roman Catholic, most others are Protestant and about 5 percent are Muslim.

LANGUAGE: Filipino, a Malay language based on Tagalog, is the predominant language. English, the second official language, is widely used in business and government.

HISTORY: Ferdinand Magellan claimed the islands for Spain in 1521 and was killed near Cebu. The Philippines remained a Spanish colony until the US Navy defeated Spain’s fleet at Manila Bay in 1898. The Americans crushed Filipino rebels in a six-year war. Japan occupied the country in World War II until US troops returned in 1944. Independence was granted in 1946. Late dictator Ferdinand Marcos dismantled democracy in 1972, retaining many authoritarian powers until he was ousted in 1986. There are pockets of unrest, including long-running rebellions by Muslim separatist in the south and communist guerrillas in the provinces.

ELECTIONS: About 55 million people are registered to vote. Nearly 45,000 candidates are vying for 18,000 national and local posts, including five who are contesting the presidency. Six candidates are running for vice president, a position which is separately voted for. Fifty aspirants are running for 12 of 24 Senate seats while more than 600 are eyeing 235 seats in the House of Representatives. Other openings range from provincial governors to town councilors.

ISSUES: Outgoing President Benigno Aquino III regards the elections as a referendum on his “straight path” style of governance that’s characterized by his efforts to fight corruption and poverty. That may be gleaned in how former Interior Secretary Mar Roxas, who is backed by Aquino, will fare. Aquino has also campaigned against Rodrigo Duterte, who he regards as a threat to democracy because of remarks that he may close down Congress and form a revolutionary government if lawmakers stall his programs.