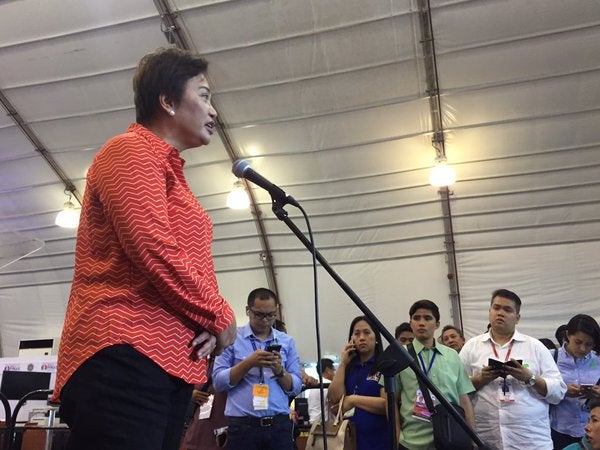 Comelec commissioner Rowena Guanzon says the report that there are VCMs at a hotel in Cubao is nothing but “kuryente.” ARIES JOSEPH HEGINA/INQUIRER.net

The Commission on Elections (Comelec) has discredited the claim made by Parish Pastoral Council for Responsible Voting (PPCRV) chair Henrietta de Villa that some vote counting machines (VCMs) were being stored in rooms at a hotel in Cubao.

In a press conference, Comelec commissioner Rowena Guanzon said that De Villa’s claim that some VCMs were stored at the 7th floor of the Novotel is not true.

She said that she had asked Comelec National Capital Region director Temie Lambino about the allegation and was told that the information was false.

“I texted him. He texted back. [He said] ‘Ma’am, the PNP said it’s not true,’” the commissioner said.

She also hit those who believe in false information in order to foment a culture of fear during the elections.

“The problem is every time you get this second-hand information, ang mga tao pinapalaki nila kasi gusto nila ng magulong eleksyon (people blow it out of proportion to make it appear that the election is chaotic),” Guanzon said.

Amid the spread of misinformation, Guanzon advised the public to “stay calm.”

“Kung may kababalaghan po sa inyong presinto, isumbong niyo po sa BEI (Board of Elections Inspectors) at ilalagay niya ‘yan sa minutes (If there are irregularities in your precincts, report them to the BEI, and they will put them in the minutes),” she said.

Different camps assailed the reported existence of the VCMs in the hotel because the family of presidential aspirant Mar Roxas developed the Araneta Center where the hotel is located.

Reports said he confirmed that there were Smartmatic technicians who checked in the hotel, but that he found no VCMs in the said establishment. IDL