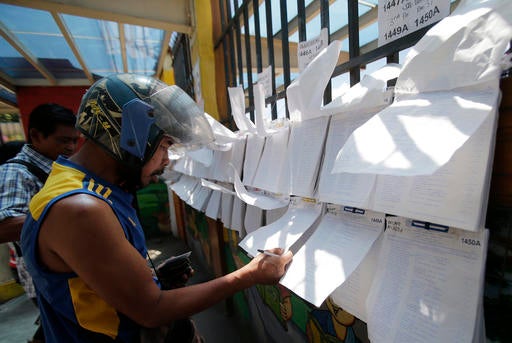 A Filipino checks a list of voters and their corresponding precinct numbers at a polling center in suburban Quezon city, north of Manila, Philippines on the eve of election day Sunday, May 8, 2016. Thirty years after emerging from a brutal dictatorship, Filipinos will face a dilemma when they pick a new leader on Monday: Should they choose an outspoken mayor with an audacious promise to wipe out crimes and graft within months or back reformists who would not be as bold but say they wouldn’t put democracy at risk. AP File Photo

The National Citizens’ Movement for Free Elections (Namfrel), Legal Network for Truthful Elections (Lente) and Kontra Daya have cited cases of poll irregularities which occurred in a number of precincts nationwide. These cases include rejection of ballots by the vote counting machines (VCMs), distribution of sample ballots by children in schools, malfunction of VCMs and smoking in polling places.

Kontra Daya, on its Twitter page, listed various precincts in Marikina City, Quezon City, Occidental Mindoro and Paranaque City where the VCMs encountered problems. Due to these snags, the group is asking the poll body to extend voting hours to 7 p.m.

The election watchdog also reported the sighting of an armed soldier at Labac Elementary School in Naic town in Cavite province—which is a violation of Commission on Elections (Comelec) Resolution No. 10047.

Namfrel also noted two supposed election-related violence in Mindanao: one hurt in shooting at Hamidhalin Elem School in Jolo town in Sulu province while another person was wounded in bombing in Maimbung town in the same province.

The national and local elections, where 18,000 posts are up for grabs, are underway. The Comelec is expecting 75 to 80 percent of the 54.5 million registered voters to cast their votes. RAM/rga

READ: 18,000 posts up for grabs as precincts open for polls