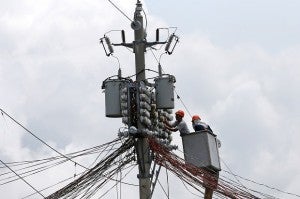 MANILA, Philippines — The Department of Energy (DOE) and affiliated agencies, such as the National Grid Corp. of the Philippines (NGCP), and the Manila Electric Co. (Meralco) have assured the public of stable power supply in voting centers and canvassing centers, citing enough energy reserves to serve electricity demand nationwide.

“We have a very comfortable reserve level for the elections because it is a non-working holiday so demand should be low,” Energy Secretary Zenaida Monsada said. The energy chief said there might be incidents of power service interruption in residential areas but enough power supply in polling centers has been guaranteed.  “In case there are incidents, such as unforeseen power plant outages, that lead to power loss, and there may be outages in households, we assure power for polling centers and canvassing centers.”

Gross power reserves for Luzon are estimated to reach 2,710 megawatts (MW), for Visayas 209MW, and for Mindanao 235MW, according to NGCP data. “All grids have reserves above all the required levels,” Monsada said.

Monsada said Luzon could export up to 180 megawatts of power to Visayas in case of need. Peak demand for Mindanao may reach 1,363 MW.

The energy family, which includes DOE and its line agencies, together with NGCP and Meralco, activated their joint command center at the NGCP head office in Quezon City at 12 p.m. Sunday.

DOE, NGCP, the National Transmission Corp., the National Power Corp. (in charge of power in off-grid areas), the National Electrification Administration (in charge of electricity cooperatives), and Meralco (Manila Electric Company ) have all sent personnel for 24-hour monitoring work at the NGCP-based command center.

Besides having personnel stationed at the power monitoring command center at the NGCP headquarters, Meralco has activated its own 24-hour monitoring center for the poll stations and canvassing
stations located within Meralco’s franchise area in Metro Manila and surrounding areas.

Just in case power supply dips unexpectedly, Meralco can activate the Interruptible Load Program or ILP, under which private firms can be called on to use their own generator sets to ease power demand from the grid. Some 786 MW of capacity have been committed by participating private firms for the ILP.

Monsada said the distribution utilities in Visayas have set their own ILP with total capacity of 64MW.

Monsada said DOE and private firms NGCP and Meralco would closely watch the days immediately after elections since those would be regular working days. She said DOE has dedicated the hotlines
09983816167 (Smart) and 09175414917 (Globe) for power concerns during and after the elections.

The NGCP said that as early as February this year, it had started to implement its contingency plan to ensure that the country’s power transmission network would work well during the nationwide elections on Monday (May 9).

“We are aligning our efforts with the Department of Energy and the rest of the power industry to ensure a blackout-free May elections. As system operator, NGCP is closely coordinating with generators to
ensure sufficient power supply and reserves. The continuous flow of electricity from generators to distributors through the power grid facilities will benefit customers who depend on these power services, the NGCP said in a statement.

NGCP has also been preparing its facilities and deploying its resources to be responsive to any incident that may affect transmission services during the election period. NGCP said people could report concerns on transmission facilities, such as suspicious activities around towers, through the hotlines 091784764327 or 0917-TIP-NGCP (Globe) and 09188476427 or 0918-TIP-NGCP (Smart).

Some of the contingency measures put in place were the suspension of line and equipment maintenance and testing activities two weeks before and one week after election day to make sure that all facilities are on-line and available from casting to counting of the votes. In case of power interruption, the grid operator will be ready to deploy its strategically placed aircraft, emergency restoration structures, and spare parts for faster line inspection and restoration.

Besides having activated the Over-all Command and Control Center in its headquarters, where DOE and other agencies are represented, NGCP has also activated regional and district offices 24/7 from Sunday until Tuesday, and for 8 hours each on Wednesday and Thursday. These command and control centers will also serve as the energy sector’s main monitoring and information centers, according to the NGCP.

On the issue of right-of-way, which has been a major problem for the company in recent months, the NGCP reported: “We are also expediting our right-of-way clearing operations. We want our lines to be cleared of illegally planted trees before the elections for more reliable transmission service. We are doing this with COMELEC (Commission on Elections) Resolution 10067 as legal cover and assistance from the AFP (Armed Forces of the Philippines), PNP (Philippine National Police), and LGUs (local government units).”  SFM