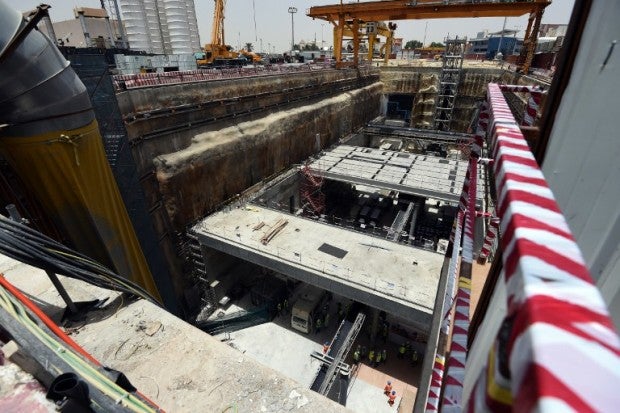 A picture taken on May 4, 2016 shows a construction site of a section of the Saudi capital Riyadh’s $22.5 billion metro system.
The system, which will have six lines covering 176 kilometres (109 miles), supported by a bus network of 1,150 kilometres, is due to be completed by the end of 2018. Deputy Crown Prince Mohammed bin Salman announced a long-term reform programme, dubbed “Vision 2030”, marking the beginning of a hugely ambitious attempt to move Saudi Arabia beyond oil, the backbone of its economy for decades. / AFP PHOTO / FAYEZ NURELDINE

The new energy minister of Saudi Arabia, the world’s biggest oil exporter, on Sunday pledged continuity in the kingdom’s oil policy, after being named in a major government overhaul.

“We remain committed to maintaining our role in international energy markets and strengthening our position as the world’s most reliable supplier of energy,” Falih added.

His predecessor Naimi had led the now-defunct ministry of petroleum and mineral resources for about two decades.

Naimi oversaw a major change in policy towards the end of his tenure when the Organization of the Petroleum Exporting Countries (OPEC) refused to cut production despite a price plunge.

Instead, OPEC kingpin Saudi Arabia focused on protecting its market share and driving out less-competitive players, including the developers of US shale oil.

Major oil producers failed to reach an agreement on freezing output in Qatar last month as Saudi Arabia insisted any deal must include all OPEC members, including rival Iran which boycotted the talks.

The price collapse, from above $100 in early 2014 to less than $45 on Friday, has intensified Saudi efforts to diversify the economy away from oil which makes up the majority of its revenue.

Falih was appointed as part of a government shakeup that saw several ministries merged in what analysts said reflected the government’s determination to diversify the economy under its wide-ranging Vision 2030 plan announced last month.

Falih said the new ministry was created “in line with the ambitious objectives” of the vision which has pledged “transparency and accountability”.

The new approach “will help the kingdom to better meet domestic and international energy demand,” while integrating and diversifying energy and other resources, he said.

An oil industry source, speaking shortly before Falih issued his statement, said he did not expect any change in Saudi oil policy under the new setup.

The kingdom produced about 10.1 million barrels of oil per day in March, according to data cited by OPEC.