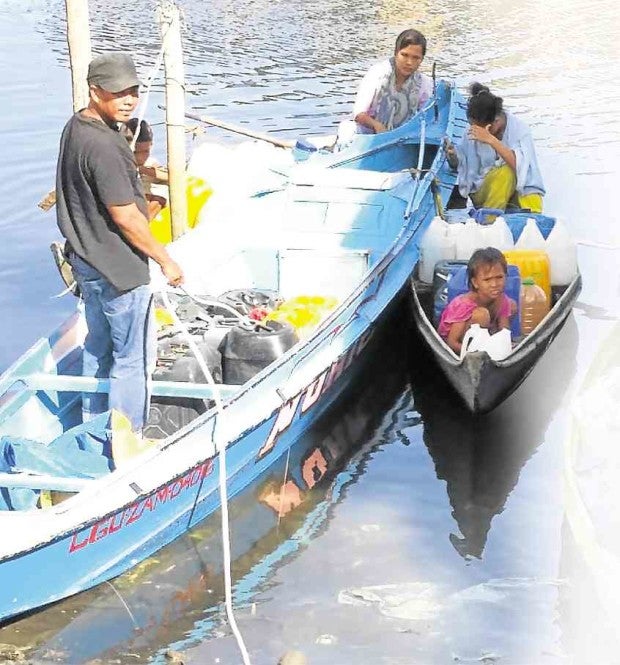 RESIDENTS of Zamboanga City load water containers on their boats as the city continues to grapple with a shortage in potable water and water contamination. JULIE ALIPALA/INQUIRER MINDANAO

ZAMBOANGA CITY—On April 2, Bakil Awil rushed his two sons to a hospital after they started vomiting and suffering from loose bowel movement.

The next day, the dry goods and electronics shop owner had to rush a third child, his youngest, to the same hospital for the same reason.

Awil, of Barangay Arena Blanco here, said he did not suspect that the water rationed to them had been contaminated.

Dr. Rodelin Agbulos, city health officer, said tests made on the water during Health Secretary Janette Garin’s recent visit here showed that the water being consumed in many parts of the city had been contaminated with bacteria.

Total coliform is a group of bacteria commonly found in the environment, as well as the intestines of mammals, including humans, but are not likely to cause illness. Its presence indicates that the water is vulnerable to contamination by more harmful microorganisms. E. coli, a member of the total coliform group, is more dangerous and can actually kill.

“Our water is safe because of the chlorine content,” Vasquez said. He said the standard for chlorine was 0.3 parts per million in chlorine residual.

“Our responsibility ends in the water meter,” he said. “We are not in control of the pipes that go into the house of every consumer. If there are leaks, that is not our problem. If people collect water and they store it inside the containers, then we are not sure anymore how clean the containers are. It all boils down to proper hygiene,” Vasquez said.

Showing the master list provided by the Department of Health, Vasquez said only one tap released water, which was found positive for coliform.

“We are investigating this,” he said.

Agbulos said, as of April 30, 1,938 cases of acute gastroenteritis had already been recorded in the city.

The city has been experiencing water shortage because of the dry spell as water sources had dried up.

“The statistics presented by all hospitals in the city, public and private, showed that acute gastroenteritis cases are now over the epidemic threshold,” Agbulos said. Julie Alipala, Inquirer Mindanao