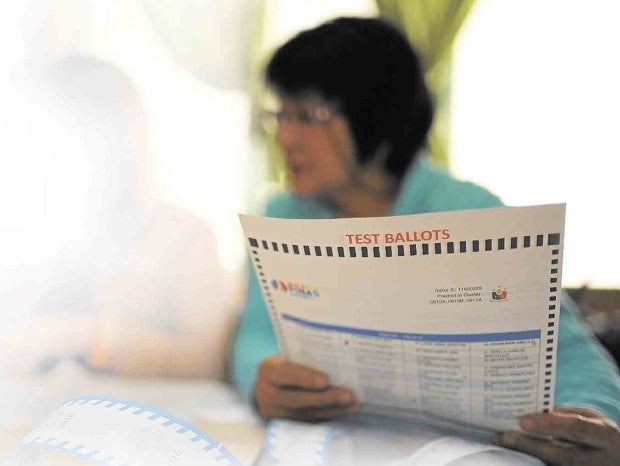 A TEACHER in Baguio City shows a test ballot during testing of VCMs. Her counterparts in Central Luzon are assured of legal assistance if they encounter harassment. EV ESPIRITU/INQUIRER NORTHERN LUZO

CITY OF SAN FERNANDO—Central Luzon is ready for the May 9 elections, and this includes tapping lawyers to help protect from harassment teachers who will man poll centers .

The 37,899 public school teachers tasked with poll duties in the region would have access for the first time to lawyers who would help them deal with cases of threats and violence.

A regional election task force would include eight legal officers who would handle issues involving teachers on election day, said Nicolas Capulong, assistant director of the Department of Education (DepEd) in Central Luzon.

Central Luzon is the region with the third highest number of registered voters at 6,056,532. Each of the 20 school divisions in seven provinces and 14 cities in Central Luzon will be assigned a lawyer.

“This is the first time we are going to have lawyers to help our teachers in election-related situations,” Capulong said.

Emmanuel Ignacio, assistant director of the Commission on Elections (Comelec) in Central Luzon, said the 2016 elections would be the last time that public school teachers would render mandatory service. “In the next elections, their work will be voluntary,” he said.

The region has 20 areas on the election watch list, including nine in Nueva Ecija province.

Police said six election-related cases of violence had been recorded since the election season began. A total of 597 people were arrested for violating the election gun ban imposed on Jan. 10.

The Parish Pastoral Council for Responsible Voting in the Archdiocese of San Fernando in Pampanga province has mobilized 3,000 volunteers to monitor the delivery of vote counting machines (VCMs) and ballots, the final testing and sealing of VCMs and the conduct of the elections on May 9.

He said VCMs had been installed in 1,229 clustered precincts in 17 Tarlac towns and Tarlac City.

Also on Monday, police officers in Bulacan province and Baguio City signed their oaths of nonpartisanship and neutrality in the May 9 elections.

A total of 1,800 policemen are assigned to man polling places in 21 towns and three cities in Bulacan. Reports from Tonette Orejas and Carmela Reyes-Estrope, Inquirer Central Luzon, and Gabriel Cardinoza, Inquirer Northern Luzon