Peping Cojuangco: Duterte not a threat to democracy 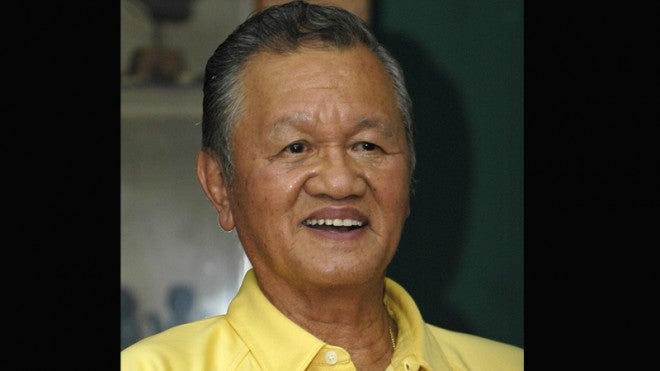 Cojuangco, brother of Mr. Aquino’s mother, the late president and democracy icon Corazon Aquino, said the tough-talking mayor was not the real threat to democracy but the administration’s supposed insensitivity toward the plight of Filipinos.

“Duterte is not the threat to democracy. It is this administration’s insensitivity to our people’s plight and yearning for a decent and peaceful life which has caused this irreversible tide of compulsion for real and meaningful reforms,” Cojuangco said in a video message making the rounds on social media, a transcript of which was shared by Duterte’s spokesperson Peter Laviña on his Facebook account.

Going into the final days of the campaign period, Mr. Aquino, whose parents led the toppling of the Marcos dictatorship, has become more specific in describing the May 9 vote as a choice between democracy and dictatorship in his speeches.

Mr. Aquino has appealed to voters not to let another martial rule to happen, amid the continuous lead of Duterte and Sen. Ferdinand “Bongbong” Marcos Jr., the late dictator’s son and namesake, in presidential and vice presidential preference polls.

Duterte, who continues to enjoy a double-digit lead over his rivals three days before the elections, previously said he would abolish Congress if there would be attempts to impeach him.

The President’s uncle, who previously expressed support for the candidacy of Vice President Jejomar Binay, said Mr. Aquino’s remarks “have become a betrayal of all the sacrifices of his father and mother.”

“As a freedom loving Filipino, I have decided to rise and defend democracy once more. Ninoy came home ready to give his life for God, our country and the Filipino people. Cory in 1986 became President so that democracy may live and flourish,” Cojuangco said.

“Let not even the President—the son of Ninoy and Cory — threaten us by using his public office and spending public funds to extinguish the legacy of his parents which they bequeathed to the Filipino people, that of fair, free and credible elections,” he added.

Cojuangco  urged voters to be vigilant amid “fears of disenfranchisement and massive fraud” and to be “faithful to the ideals of freedom and democracy for which many of us fought hard for.”

“Let us fight for the universal human right of suffrage. Let no one trample on this right. Ako si Peping Cojuangco, inuulit ko po Duterte (I am Peping Cojuangco, I repeat Duterte) is not a threat to our democracy,” he said.

Duterte, a self-confessed adulterer, is also known for his profanity-laced speeches and controversial remarks, including cursing the Pope as “son of a whore” and joking that he should have been first to rape an Australian missionary who was murdered during a Davao prison riot in 1989.

The feisty mayor, who vowed to wipe out criminality within three to six months should he win the presidency, has been widely criticized for his alleged involvement in extrajudicial killings in his turf and alleged links to the so-called Davao Death Squad. He publicly admitted killing criminals on different occasions.

Duterte vowed to dump criminals on Manila Bay and pardon himself for mass murder. RAM/rga