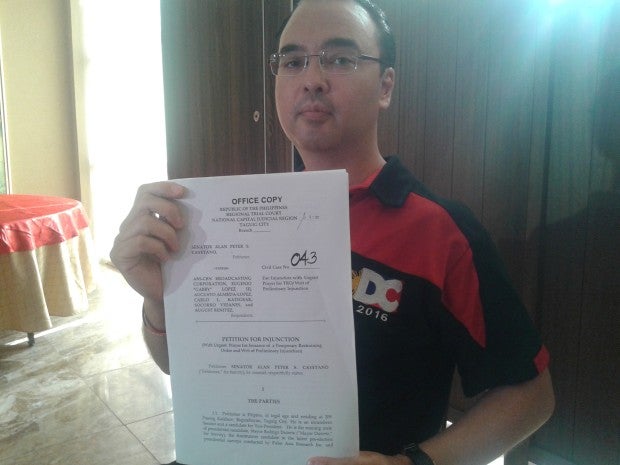 Sen. Alan Peter Cayetano files a petition seeking a temporary restraining order on the airing of a political advertisement against Davao City Mayor Rodrigo Duterte in the Taguig Regional Trial Court on Friday.

The Taguig Regional Trial Court on Friday afternoon issued a temporary restraining order (TRO) on a television network over the airing of a political advertisement against presidential candidate Rodrigo Duterte.

The 30-second TV spot was shown on Thursday over ABS-CBN, which said the commercial was paid for by Sen. Antonio Trillanes IV.

The ad showed various instances where Duterte uttered expletives while minors were asking the public if they wanted the foul-mouthed Davao City mayor for president.

The court granted the TRO and banned the airing of other advertisements of similar nature.

“Respondents are hereby enjoined to further broadcast that advertisement using minor children and paid for and by Antonio Trillanes IV, including any other future advertisements of similar nature,” the TRO said.

The TRO said the ad “must be suppressed at once, as repeated broadcasting of the same will be irreparably inimical to the children’s welfare and interest.”

It cited Section 2, Article 8, of the 2007 Broadcast Code, which mandates that “no program or sponsor shall be allowed to manifestly favor or oppose any candidate or political party.”

“These advertisements do manifestly oppose a candidate, and thus, the court cannot allow minor children to be used in such black propaganda,” the TRO said.

“Furthermore, there is truth to the claim that petitioner’s right to reply will be denied considering that the Election Day is so close now,” the TRO added.

ABS-CBN on ‘anti-Duterte’ TVC: We are duty-bound to air legitimate ad